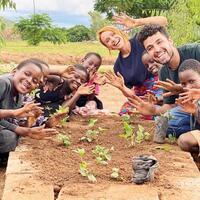 As part of a project to train starving African villagers in agricultural practices, a Turkish agronomist is spending days in Malawi teaching locals what to plant for food.

“You know the famous saying, ‘Give a man a fish and you feed him for a day. Teach a man to fish, you feed him his whole life. This is what we are doing,” Merve Gülistan Aydın, an agronomist, told Hürriyet daily on January 11.

The name of the project that brought Aydın to this southeastern African country is “Nature in my heart”, carried out by the “Dreams of Children Foundation”.

For the past month, she has been teaching sustainable agricultural practices to dozens of villagers in rural areas of the country threatened by hunger.

“I came here at the invitation of the founder of the foundation, Mahmut Ensari Caymaz. We are setting up orchards with our African friends,” she noted.

Born in 1991, Aydın studied organic agriculture at Gaziosmanpaşa University in the Black Sea province of Tokat. Working in the first and only biodynamic farm in Turkey, she consulted many companies and people across the country interested in agriculture for years.

However, people recognized her for her charitable works and her efforts in the disaster areas. In February 2020, she became famous for her efforts to rescue animals trapped under the debris of buildings that collapsed after an earthquake in her hometown, the eastern province of Elazığ.

“Besides planting, we also have a ‘dairy goat project’. Malawian families get milk from animals and learn how to make dairy products,” she said.

She also thanked everyone who donated saplings to the people of Malawi once she announced the project on her social media accounts.

“As soon as I made the announcement, an avalanche of donations was made. With the help of donors, we have planted some 1,200 seedlings of lemon, orange and mango trees in two villages in Malawi,” she said. “We then wrote the names of the donors on the saplings and posted the pictures of them on social media.”

It is quite heartening to see new donors lining up, Aydın added.

Caymaz, who has been in the African country for six months, is proud to welcome Aydın to Malawi. “We gave agricultural training to adults and taught botanical education to children.”

He called the orchards he set up with Aydın an “ecological school”.

Romania in the top 5