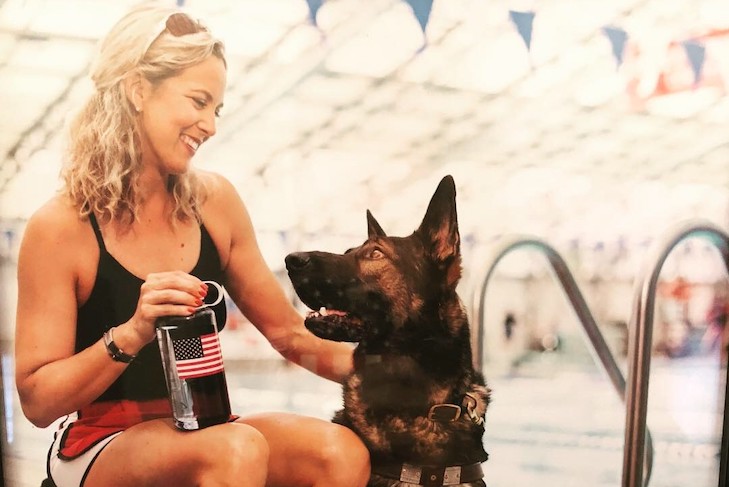 Think about it for a minute: you’re a blind professional athlete (paralympian and national triathlon champion) with a feisty German Shepherd guide dog who also needs a power outlet.

Welcome to the swirling ingenious world of six-year-old Amy Dixon.

Ever since the 77-pound Woodstock entered Dixon’s life, he’s been shackled into the pattern of a working dog-turned-show dog.

The black sand dynamo typifies the spirit of challenge in both AKC Rally and Obedience, where he won the Master and Novice titles respectively. Dixon is believed to be the first blind person to win an AKC Rally Masters title.

Shortly after moving to Encinitas, Calif., from Greenwich, Connecticut in 2017, life suddenly got tougher for the couple with the long distances between stores, the gym and doctor’s offices. “In Connecticut, I lived in a downtown area where our regular stops were readily available to us,” says Dixon, who is 98 percent blind and has no peripheral vision. In Encinatas, these locations are primarily accessible via Uber, Friends, and Handicapped Transit.

Woody’s world was suddenly turned upside down by the change in environment and the lack of regular sidewalk work.

“He needed stimulation,” Dixon conceded. And luckily, Dixon was discussing his dilemma at a nail salon shortly after the move when another customer replied that the nearby Hidden Valley obedience club should have a lot to offer.

And There you go ! After a few group training sessions to get familiar, Woody quickly learned obedience and then rallying. “I love that you can talk to your dog,” she says. “And Rally lends itself to it.”

Dixon and his instructor, Rachel Williams, discovered that the rules allow a guide to tell him if his dog is sitting and read him the signs that display skill to perform during competition. Both use both hand and voice signals in the ring.

How the Woody team works

When looking for a trainer, she came up with no checklist. It was a happy accident. She needed someone who was patient and able to work through issues related to her vision loss and able to handle the dynamics associated with her and Woody.

“Every dog ​​is different in terms of warming up. Some are better off getting out of the crate and going straight into the ring. Others need to acclimate (stand and watch) and then there’s those who need warm-up exercises.

“Due to Woody’s extensive training as a guide dog, he usually doesn’t need to acclimate much. You spend 5-10 minutes warming up which allows him to go into Rally mode. Next, her guide harness is removed, and then Amy and I will find an open area where she can refine it with exercises.

Rally rules allow competitors to take a 10 minute walk – walk the course, read the signs and work out the path etc., before the competition. However, dogs cannot accompany the dog handler, so Woody is confined to a nearby crate or kept on a leash with a friend who has come to watch.

“During the guided tour, I approach the judge and explain Amy’s disability and that I will be guiding her through the course. Amy uses a cane as we move around the course together. When we approach I read each panel to her and ask her if she has any questions. At this point she executes the commands she will use later. We repeat this procedure two to three times to allow her to memorize the layout.

At Team Woody’s competition level, all exercises are performed off-leash.

“I try to stay right behind, or just to his right,” Williams notes, “always on the move so I don’t obstruct the judge’s view of the team. If there are exercises that require Amy to step away from Woody, I take her by the arm and guide her into position.

“When we’re done, I get the leash or help Amy do it, leave the ring and go back to the setup area. Woody knows it’s cookie time.

Williams cites confidence, timing and resilience as key factors in the team’s continued progress. “For the level at which she competes, you have to be close to perfect.”

Rally and obedience have deepened this soulmate union, which has been a “work in progress” since they were paired when Woody was three by the Fidelco Guide Dog Foundation in Connecticut.

“He lights up my life with his enthusiasm in the ring,” smiled Dixon. “He works but has fun. God knows he serves me a lot of the day, so Rally was the perfect outlet for him to do his thing.

Before the pandemic, the two trained weekly at the obedience center. Dixon and Woody are now training in a field near her home.

Dixon’s incredibly busy schedule leaves him only a narrow window for AKC broadcasts. For example, she is not only a full-time professional triathlete on Team USA, but she is also a certified USA Triathlon Level 1 coach, motivational speaker, and president of Glaucoma Eyes International.

Team Woody typically competes in Rally Trials during its triathlon off-season from October through February. But that’s not the case this year, as she will compete in the World Para Triathlon Championships in Abu Dhabi, United Arab Emirates, on November 5-6. His daily training schedule of swimming, cycling, running and weightlifting spans six hours. Add to that business engagements — which include appointments, sponsorship obligations, speaking engagements, and media interviews — starting at 5 a.m. and ending around 6 p.m.

Thus, Woody’s competition calendar is completely flexible. It begins with Williams sending Dixon a list three months in advance of the shows she plans to attend. If Dixon’s in town, she can come in.

The duo only competes in four or five rally and obedience events a year, all in Southern California. Downtime is not part of Dixon’s vocabulary as she strives for the perfect work-sport balance. When a lot of time passes between Woody’s in-ring appearances, the resourceful athlete takes her exercise bike out for practice in a nearby parking lot.

The availability of transportation to get to shows within driving distance and his triathlon training schedule are key factors here. “I’m not supposed to stand for long when I’m not training,” she explains. “Shows can sometimes require a day of standing in the sun, which is not ideal for recovery as a professional athlete. If our rally or obedience registration is early in the morning and there is a pool nearby to swim in between the afternoon bell time, then I can enter.

When training issues arise, Dixon texts Williams for advice. “We follow up with a telephone discussion or two to define corrective measures,” explains the trainer.

Dixon, refreshingly candid, acknowledges that the push and pull of emotions to keep fearless Woody motivated and honed requires a mix of psychological buoyancy and managerial prowess.

“He’s my partner and my heart dog,” she concludes. “He’s an athlete who takes his job seriously, both as a guide dog on the streets and as a partner in the ring. Couldn’t ask for more.

The exclusivity of agriculture