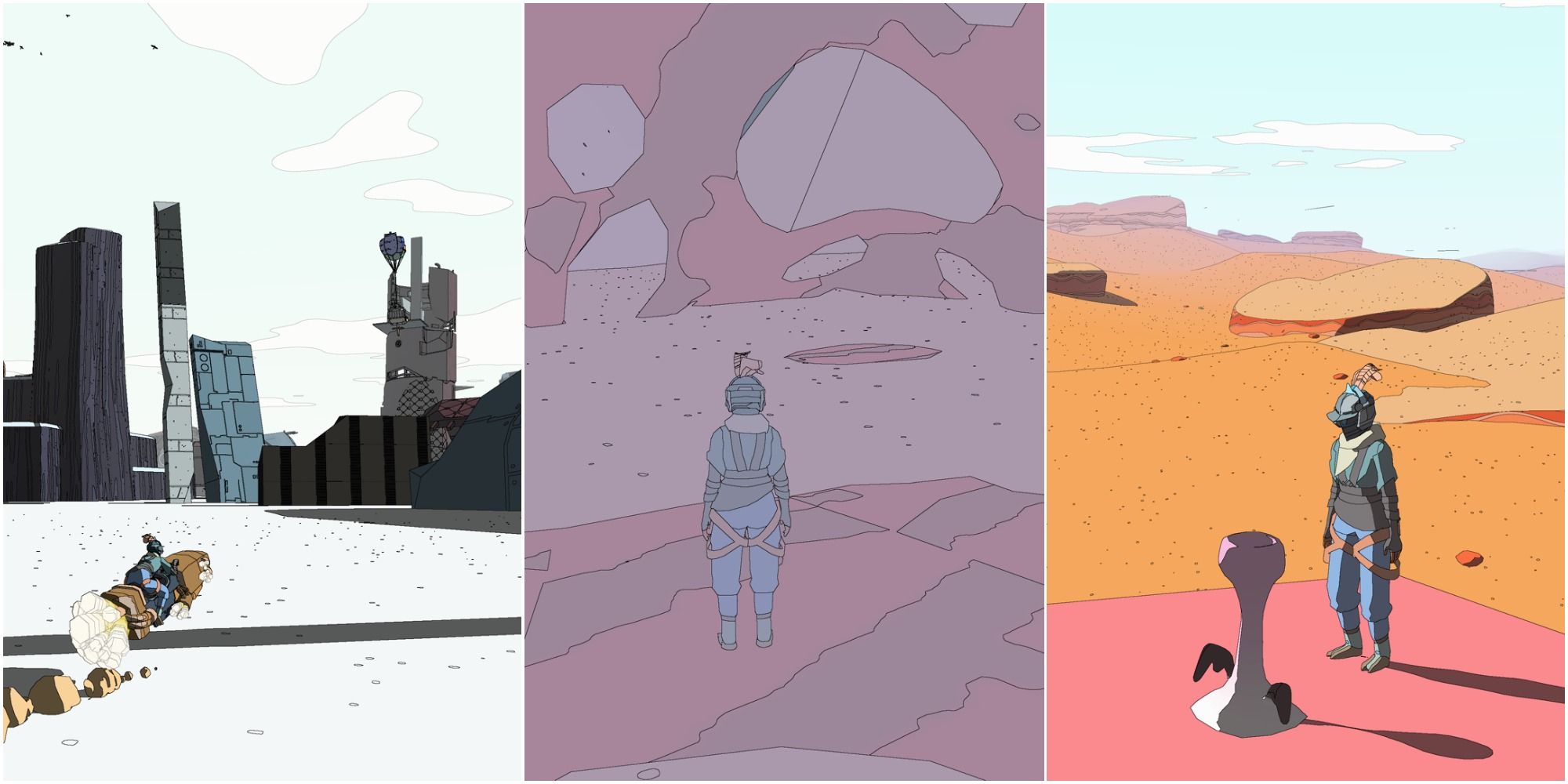 Sable is a wonderful indie game from developer Shedworks that gives players the freedom to explore a vast, beautiful, and open world at their leisure. There are plenty of ruins to uncover, secrets to find, and characters to encounter across the pale dunes and towering obelisks of the world of Sable.

But with all that room to explore, it’s no surprise that the game has some issues as well. From performance issues to some weird design choices, there are a few flaws that Sable could smooth out to establish itself as one of the best games of the year.

Sable is one of the most visually arresting games to release this year, with a striking color palette and art style that sets it apart from others in the genre. It’s especially striking when traveling the vast gaming world on Sable’s signature jetbike.

Unfortunately, Sable often can’t keep up with everything that’s happening on screen at once, especially in the busiest areas of the game. The frame rate can even drop below one frame per second when riding the jetbike in asset-rich areas. Locking Sable at a stable framerate would improve performance across the board, bringing it in line with many other games with vastly improved frame rates.

GAMER VIDEO OF THE DAY

The world of Sable is big and traveling through can take a while, especially before unlocking fast travel. Sable’s handy jetbike makes traversing the junk much easier, and custom parts allow for both creativity and improved functionality in bike design.

The game is having issues with the asset population, however, and it’s most egregious while riding Sable’s jetbike. Rocks and bushes will spontaneously generate directly in front of the vehicle, causing frequent crashes that will cut off any momentum the player may have created.

Sable is all about exploration; there are secrets to be discovered at the top of every natural rock formation and at the bottom of every crevice. This makes it all the more frustrating when, after a very carefully executed climb, Sable trips over the ledge at the top and slides all the way down.

Whether the player is trying to reach the top of a mountain or explore the inner workings of a crashed spaceship, the environment often does not hold up. Sable can get stuck behind barriers she was never meant to get around, and issues like this can ruin the gaming experience.

Chum Eggs are the only persistent collectible in Sable, and picking them up is always worth it. Returning them to the Chum Queen gives players a permanent stamina boost, similar to shrines in The Legend of Zelda: Breath of the Wild.

But there are dozens of eggs scattered around the world, and trying to find those final eggs can be daunting. For players looking to fully complete the game, youhere should be an item like a compass or a map this makes it easier to find Chum’s last egg.

Sable places a lot of emphasis on the masks the titular character earns throughout their journey. The ultimate goal of the game is to find the mask that best suits his lifelong calling, and then choose that mask to end his coming-of-age journey.

However, the masks have no functional purpose, nor the different outfits Sable can collect along the way. It’s all purely cosmetic, which is a bit disappointing compared to similar games with more robust clothing options. Adding functionality to clothing would make choosing them more meaningful and more in line with the themes of the game.

SableThe inventory screen is a bit messy. Masks are grouped together with the rest of the clothing, while collectible Chum Eggs live in the “General” tab alongside Caught Bugs and Bike Dyes. The Key Items tab includes the cards Sable has purchased, but not the rare ancient trinkets that hint at the deeper lore of the world.

There’s even a bike parts section in the inventory, but it doesn’t provide any performance information for those parts, essentially functioning as a random collection screen. Execution a more dedicated inventory with a special place for each type of item would make sorting and chronicling much easier.

3 More information in the Quests tab

The Quests tab of SableThe menu contains all the quests Sable has acquired, both active and completed. While much of the game’s appeal comes from discovering new locations and solving puzzles without the game holding the player’s hand, some of the quest entries are too thin to offer any help. .

Crucial information to complete the quest should be included in the quest description, whether it’s a cryptic clue or instructions on how to catch a particular breed of insect. This would retain the game’s sense of mystery without the frustration of endless backtracking.

Quests are at the heart of Sableand unfortunately, more than a few of them have game-breaking bugs. And not the bugs that players will have to go out and grab for a handful of quests. Two of the quests to earn beetle badges either have animal AI that doesn’t work, or the beetles that Sable needs never spawn.

In some cases, the environment itself is the problem: switches won’t kick in or a necessary object can’t interact with it. This is the simplest problem in the game and it needs to be fixed so that most quests are even doable.

1 Clearer signage at the start of the game

Exploration is a fundamental concept in Sable, and stumbling across a place you’ve never seen before is one of the best parts of the game. That said, it could benefit from slightly clearer signposting to some important areas early in the game.

The Chum Lair, in particular, is not clearly marked and yet is arguably the most important location in the game. Visiting the Chum Queen gains permanent stamina boosts for Sable, making the Chum Lair a crucial place to visit as soon as possible.

Amouranth returns to Twitch after a 3-day ban

Twitch is overturning its fifth ban against popular streamer Amouranth, allowing her to return to the streaming platform after just three days.