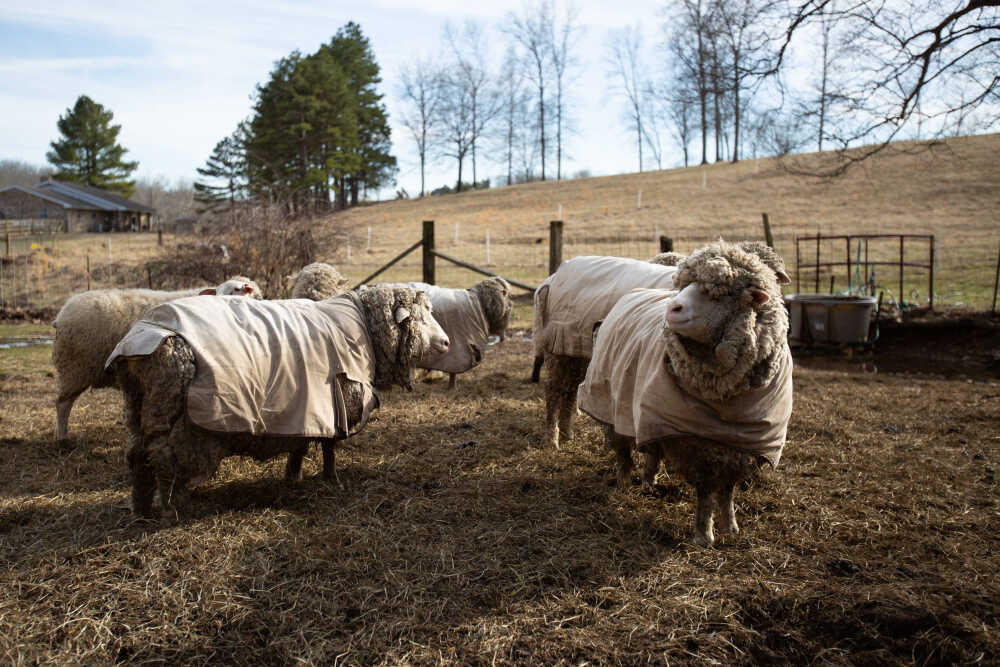 Sheep graze on the hill, guarded by one of the five Great Pyrenees dogs at Mesta Meadows in Glenallen, Mo. There are also 50 sheep, 12 Scottish Highland cows, 50 chickens, 12 ducks, two goats and two other dogs who live on the farm.

When Ed Crowley and his wife, Terri, were living on a dairy sheep farm in Kentucky, they received a phone call from a woman in Florida. She said she was coming for a conference and her daughter, who had never been on a farm before, was coming with her; could they visit their farm and milk a sheep?

The Crowleys agreed, and Ed said something “penetrating” during that visit: he realized the importance of helping people understand where their food comes from and how it’s grown.

“We favor slow foods, healthy foods, cultured foods,” says Ed, who is an assistant professor of management at SEMO and vice chair of the board of Slow Food Southeast Missouri. “We don’t use chemicals. We only use antibiotics in animals when they absolutely need them. We do not use any growth hormones. … We strongly believe in taking care of the land and the animals, and then they will take care of you. So that’s what we’re trying to do.

Sheep graze at Mesta Meadows in Glenallen, Mo. There are 50 sheep on the farm.

Ed grew up on a large dairy and beef farm in southwestern Missouri and said when he was younger he couldn’t wait to get away from it. He spent years building companies in the tech industry.

After their children grew up, Ed’s wife said she wanted to have dairy goats. The two attended classes for nearly a year at the University of Kentucky to learn how to raise small ruminants. After the goats, they decided to also buy sheep. From there, their ranching operation grew.

When the couple moved to Missouri in February 2020, they rented land in Tennessee to keep their animals while they looked for a property to buy. After buying the Glenallen property, Ed learned that his grandfather was a telegrapher there in the 1940s and his father lived in the town when he was about three years old.

Ed raises two major breeds of sheep at Mesta Meadows: Rambouillet and cormo. The original sheep in the herd come from North Dakota.

Ed Crowley removes a protective coat from one of his sheep to show off the white wool that will soon be cut and processed. On-farm sheep’s wool averages 19 microns.

Their goal is for their sheep to have soft wool; any type of stress the ewe is experiencing can be seen in their wool, as stress causes the wool to break, Ed says. As such, they work to raise happy sheep through environment, feeding and the way they talk to them.

Ewe wool is on average 19 microns; anything under 24 microns is considered fine wool, Ed says. Farmers have 20% of the wool spun into yarn; they sell the remaining 80% raw, mostly through Etsy, to spinners all over the United States and as far away as Canada and Ireland. In 2021, they harvested around 260 pounds of wool. Sometimes people are so pleased with the quality of the wool they buy from the ranch that they ask for wool from that same ewe the following year, Ed says.

They also practice regenerative farming, fencing their land into small fields and putting all the sheep in one field until they eat the grass, then moving them to the next field, keeping them out of each field for three weeks and on for a week.

“That way it’s better for the soil, the grass grows better and it’s grass fed,” says Ed. “Part of it is just taking care of the soil, raising healthy animals , and what we’re trying to do is really create a good financial model for the farm to be self-sufficient.”

Ed Crowley runs a traveling wool section as he explains the process of producing yarn and fibers from a sheep’s coat at Mesta Meadows in Glenallen, Mo. At their farm, 20% of the wool is spun in thread ; breeders sell the remaining 80% raw.

The ranch’s goal is to provide farm-to-table options for the community, and they sell lamb through Spanish Street Farmacy in Cape Girardeau. As well as wool and lamb, they also sell free-range eggs and beef from Scottish Highland cattle, which Ed says is leaner than other types of beef. In the future, they hope to open a farm store at the ranch, to cater to campers who pass through the area en route to campgrounds near the Castor River.

Stovall grew up on a farm in Texas, where his family raised about 100 goats and 400 chickens. Like Ed, he says he was looking forward to leaving the farm to live in the city of Dallas. He came to Missouri via Georgia, North Carolina, Ohio, Puerto Rico, and Central America, where he worked as an entrepreneur or business executive. One day, while helping Ed build a fence on the ranch, he asked if he could buy him a quarter of beef, and Ed said yes. Then he asked if he could become a partner on the ranch. Ed agreed.

Johnston, on the other hand, is new to farming. He grew up in suburban Dallas growing vegetables and cooking with his grandparents who owned land. Thanks to these experiences, he became interested in hotel management. Other than working as a horse trainer one summer in New Mexico while in college, he has never worked with animals.

He says being a partner of the Ozark Highland Cattle Company is about “following the path” of what he teaches his students every day.

“I have a chef background and a doctorate in hotel management, so having the opportunity to be part of that and produce the food myself, to see it go from farm to table, is an interesting challenge and intriguing,” says Johnston. “Going through the process is motivating for me – I believe in it. … It’s not just about good for the environment; it’s good for the local community too. surrounds it and leaving it better than we found it. Profit comes after that – it’s tied to a bigger picture, helping our community get fresh, good food.

As professors in SEMO’s entrepreneurship and hospitality departments, the partners work with business students on marketing, business plans and social media campaigns for the farm. Students from nearby Woodland High School have toured the farm, and the farm is open for tours for anyone interested in learning more about sustainable agriculture. Mesta Meadows also held birthday parties and one of Ed’s students filmed a music video there.

Working with animals and being down to earth, Ed says, helps take the stress out of a hard day at the office.

“Life is so real here,” Ed says of his work at the ranch. “Sometimes you can have a great day – you had two twin lambs born today, and that’s fun. … They get up, and everything works great, and that’s just awesome. You can have a day when you have a sheep that you did everything you could, and it just dies. They just decide to die, and it breaks your heart. … So it’s very real. I’ve done some work high tech most of my life, worked on projects for years, and you finally see them come to fruition. Here, every day, you do things, and you either do it or you don’t, and that has an impact. There’s something neat about that.

Do you want to visit the farm?

A hen pecks at the ground near a Rambouillet sheep pen at Mesta Meadows in Glenallen, Mo. Owners Ed and Terri Crowley have approximately 50 sheep and 50 chickens on their farm.

Email Ed Crowley at [email protected] a few weeks before going on tour. The farm is open to school groups and individuals who want to learn more about sustainable farming practices and where their food comes from.