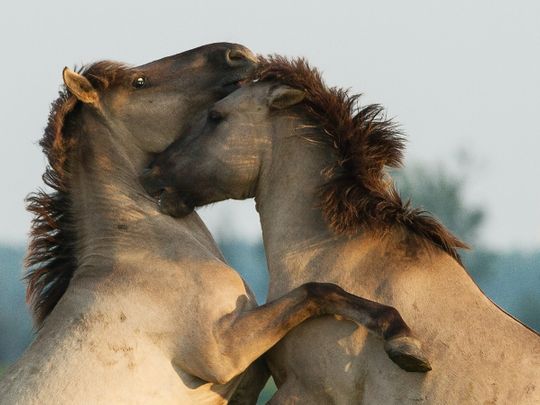 Spell It: An island full of wild horses? Discover the strangest islands in the world

Often referred to as the “Graveyard of the Atlantic”, Sable Island is located 300 km south of Halifax, Nova Scotia, Canada. The island is full of weird and mind-blowing features. There is only one tree – a skinny pine that is only one meter high. The island’s raging winds and lack of nutrient-rich soil prevent trees from growing there. Sable Island is also home to the largest gray seal breeding colony in the world. But the island is perhaps best known for two things. The first is the fact that it is home to a number of shipwrecks. Due to the choppy waters and thick fog around the island and its submerged sandbars, over 350 registered vessels died at Sable Island. Its second best-known feature is its wild horses. There are more than 500, who continue to reside there after surviving centuries of harsh winters.

You’ve heard of Planet of the Apes. Now discover Rabbit Island. Okunoshima Island in Japan’s Hiroshima Prefecture played an important role during World War II as a poison gas plant for China’s chemical warfare. But today he is known for something harmless and much cuter. The island is home to over 1,000 wild rabbits. The story goes that in 1971 a young boy released eight rabbits onto the island. Today, their rabbit descendants are a huge tourist attraction and it is possible to feed them or play with them during their visit.

Off the Gulf of Naples are two islets that form an island. Connected by a narrow stone bridge, Isola della Gaiola offers fantastic panoramic views and it is believed that Virgil, a famous Roman poet, once taught here. However, the inhabitants refuse to set foot there, for fear of falling victim to the curse of the island. The island is said to bring terrible bad luck and misfortune to its owners. In the 1800s, a hermit nicknamed Il Mago or The Wizard, lived on the island. At some point, he disappeared without a trace. The next owner, Luigi de Negri, built a spacious villa on the island – the remains of which are still there today. He suffered financial ruin soon after. In 1911 Captain Gaspare Albenga was sailing his ship around the island, deliberating whether to buy it – he crashed into the rocks and drowned. And so the curse became part of the island’s reputation. Today, the island remains abandoned and is part of the Gaiola Underwater Park, a marine protected area.