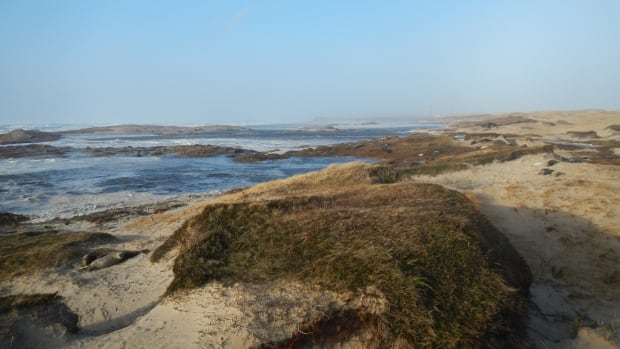 New research shows that parts of Sable Island have shrunk dramatically in recent decades – sometimes by 10 meters a year on the south side, where several freshwater ponds and a lake have completely disappeared amid surges. storms, shifting sands and sea level rise.

Using aerial photos dating back to 1959, the researchers tracked the movement of the coastline and vegetation line and used this data to model what will happen to the island by 2039.

The study published in the Canadian Journal of Earth Sciences predicts a further loss of 10 hectares of vegetated areas by 2039 (less than 1% of the island), with the core of the island remaining intact and some growth on the north shore.

He concludes that the narrow, 42-kilometre crescent-shaped sandbar located 160 kilometers off the coast of Nova Scotia is slowly shrinking, likely due to continued and accelerating sea level rise.

The paper’s predictions are based on the current rate of sea level rise, not the projected rise, which is expected to double by 2100 due to climate change.

“Climate change is driving accelerated local sea-level rise and changes in storm patterns and intensity that suggest these results should be treated as a baseline for future changes on Sable Island,” says The report.

These images provided by NSCC’s Center for Geographic Sciences show a section of the Sable Island coastline receding over 55 years.

Still, lead author Jordan Eamer of the Geological Survey of Canada said the island has proven resilient despite “really dramatic changes that can happen on a very short time scale”.

“I looked at the data and the areas where I thought we would see a lot of erosion or a lot of change and it seemed pretty stable, a lot of migration, a lot of movement. But that’s kind of what you want. You I don’t want it to be a stable rock or a stable forested island because once you lose that there’s no more.It’s a dynamic place that seems to react to change.

The most dramatic change is occurring at South Beach in the west-central part of Sable Island, which is exposed to the prevailing weather conditions.

“Over the past 60 years we have seen periods where there was at least 10 meters per year of coastline retreat, which is quite significant given the extensive infrastructure, many freshwater ponds, hotspots of biodiversity,” said Eamer.

“And where we saw this really dramatic receding of the beach, that protective foredune was basically lost. And then a large significant area that had freshwater ponds was submerged. the wind settling in the ponds themselves and it is largely a sandy plain today.”

What Happened When A Weather Bomb Hit Sable Island

When the ocean comes in and over Sable Island, the results are spectacular and a little scary.

Eamer witnessed one of these events on January 5, 2018, when a “weather bomb” landed with swells on the north side and south side, overtaking the dunes and breaking over parts of the island.

Working for Parks Canada at the time, he captured a road transformed into a river of moving seawater on video.

These videos were captured by Jordan Eamer, lead author of a study published in the Canadian Journal of Earth Sciences.

“Being on the island when this happened, the island seemed very small. I really expected to see the island disappear after a storm like this. It was before the study. It seemed like on a snapshot, it could erode. But within weeks, areas that looked dire, looked really eroded, were rebuilding,” he said.

What happens to the fresh water table

The study notes the risk posed by flooding to the freshwater aquifer, which supports a team of researchers, occasional Parks Canada visitors and a resident population of more than 550 horses.

When a big storm hits the island, seawater can flood areas. Water will collect and filter through the sands and salinize parts of the freshwater aquifer below.

Julia Cantelon, a doctoral student in coastal hydrology at Dalhousie University, monitored the impact of Hurricane Dorian in 2019 and Tropical Storm Teddy in 2020 on low-lying areas of Sable Island.

She added that groundwater still has not fully recovered fresh water in these areas.

Yet, she says, although vulnerable, the freshwater sheet is resilient.

Salinization is localized and not island-wide after a major storm.

Eamer is hopeful, but won’t comment on the island’s ability to withstand climate change predictions that could cause sea levels in the North Atlantic to rise by 80 centimeters – or nearly a meter – over the next 80 years.

“This has important implications for what is going to be submerged and where that water is going to go on the island,” Eamer said.

A key question is whether the dune system can respond to changes in sea level.

“It’s a pretty big unknown what it means for the future. Lots of questions to ask. But generally the theory is that beaches and dunes can respond to sea level rise if you give them enough space and that you have enough sand around them for them to feed on.”

Sable Island was formed after the last ice age when water levels on the Atlantic coast were considerably lower.

It was probably 10 to 15 times bigger than it is today.

“So while the changes are very dramatic and I’m not minimizing those, the island has made a lot of changes throughout its lifetime,” Eamer said.