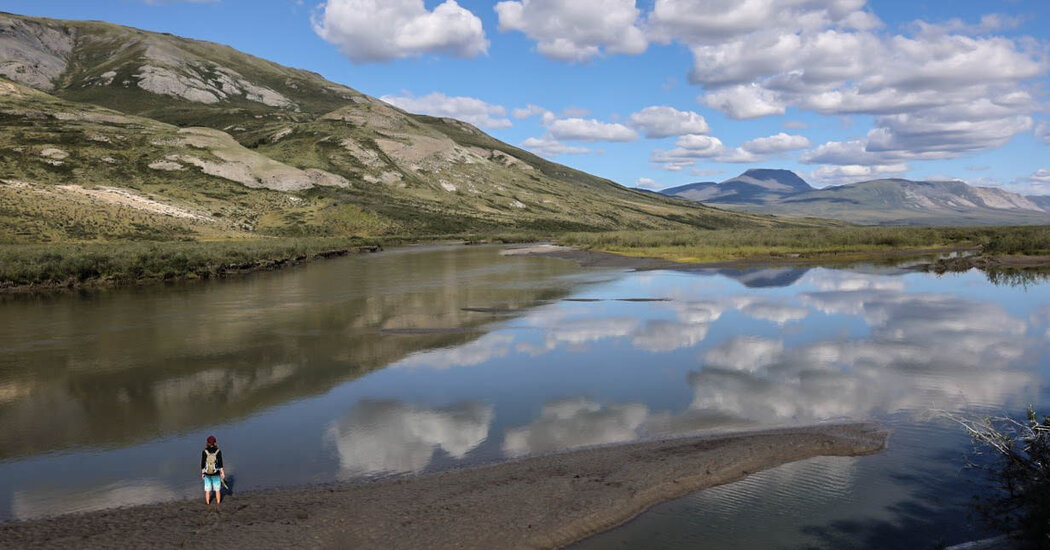 Secluded in the distant gates of Arctic National Park in northwest Alaska, the swollen Noatak River pushed our raft downstream in a high wind. Trails of caribou crisscrossed the hillsides, while cumulus clouds gathered like ripe fruit above a valley so vast one could feel lost without binoculars and frequent map searches.

To avoid crashing into the banks, I had to keep a close eye on the rising river and my hands on the oars. Because extreme rainfall had lifted the river from its banks (and delayed our seaplane flight from Bettles, Alaska by three days), every potential campsite was covered in silt and left soaking wet.

Thirty-six years had passed since I last worked as a guide on the Noatak River. This year, instead of just enjoying a trip down memory lane to the wildest land imaginable, I was amazed at how climate change had radically altered the place I once knew.

Drawn to wild places all my life for spiritual renewal, I chose Noatak as the ultimate wilderness trip to share with my 15 year old son, Alistair, and another family. I had also come to escape the record heat and smoke of the Colorado wildfires for what I thought was a cool interlude in the Far North.

To my surprise, temperatures approached 90 degrees Fahrenheit for three consecutive days. The bugs were strangely thick. We had come in August hoping that the frosts that usually started that month would have killed the infamous mosquito clouds. But climate change had lengthened the summers and delayed the cold, so we needed head nets and bug killers.

Alistair and I have refreshed ourselves several times by swimming in the river, an activity I had never thought of on dozens of trips to the Frigid North. But the past six years have seen the warmest weather on record in Alaska.

Since my first trip to these headwaters in 1982, temperatures in the Arctic have risen by several degrees Fahrenheit. At the time, we dressed for winter the first week of August. Soon after, however, scientists began to warn that the Arctic was warming twice as much as the global average. Over the decades that followed, this part of Alaska was subjected to abnormal heat waves and forest fires.

When a storm blew on August 5, temperatures dropped into the 1950s and it rained again as we floated out of the gates of the Arctic and into Noatak National Reserve. The legislated wilderness shared between these two parks spans over 13 million acres, making it the largest uninhibited landscape in the country home to the largest unaltered river system. But the region’s protected status seems little consolation given the cascade of climate change anomalies.

One of them is thawing permafrost, the frozen ground that covers nearly a quarter of the northern hemisphere. I explained to Alistair that global warming has brought permafrost out of the proverbial freezer. Eons of crustal movement, ice scraping, and soil deposition stirred and pushed ancient vegetation masses underground and froze everything in the permafrost before it could rot. More carbon is in this frozen ground than humanity has released since the start of the industrial revolution.

Now, it’s like frozen spinach is left on the kitchen counter. The permafrost has started to break down and emit carbon and methane into the atmosphere, adding to the man-made greenhouse gases that are already causing global warming.

The effects of thawing were obvious to see.

My feet stayed mostly dry during my tundra hikes in the 1980s; this time we soaked our boots several times as we walked through the weeping permafrost flooded tundra. The mountains above were devoid of snow. Year round snow cover at Gates of the Arctic has all but gone. Of the 34 square miles of white snowfields seen in 1985, only four square miles remained in 2017, according to a study.

On the Noatak, we had to steer our rafts offshore around the thawed banks as rocks fell and silt rained down into the river. Our drinking water filter has clogged several times due to dislodged sediment.

The consequences are piling up, small and large.

A recent study of small rivers and streams in the area found thawing permafrost was cooling the waters, which biologists say could affect salmon spawning. This raises long-term concerns for remote downstream communities that depend on salmon for their livelihoods.

While flying, we also saw watery craters called thermokarsts pierced into the verdant tundra. They are caused by melting surface ice above thawing permafrost. The lakes also flooded their basins, as the surrounding tundra walls melted like butter.

Woody shrubs also move north over tundra and low grassy areas as the climate becomes more hospitable to them. Shrubs in turn transfer more of the sun’s heat through snow and soil and into permafrost. In 1982, I discovered a den occupied by a family of wolves on a high bank of the Noatak in the midst of knee-deep dwarf birches and grasses; today, most of the river’s banks are festooned with tall-headed willows.

Since plants are home to much of the energy supply and habitat for wildlife, this â€œarctic greeningâ€ is changing the entire ecosystem. Attracted by these woody shrubs, moose, beavers and snowshoe hares are now moving north and causing further damage. The shrubs also reduce the cover of lichen, which is a staple food for the more than 250,000 caribou that pass through the area, some traveling as far as 2,700 miles in their migration to and from their calving grounds.

Despite all the changes we’ve seen, we’ve always reveled in a wilderness so secluded and uncrowded that we only saw one other person on our 90-mile, six-day trip to the lake. Pingo at Kavachurak Lake. We grabbed some shade in the river and blew it up for dinner out of the scorching sun under a rigged raft. We gorged ourselves on wild blueberries. For an hour, in a bug blast on top of a hill, we watched a grizzly bear and her cubs, oblivious to our presence, cavort and wade through the tundra.

All this while caribou kept their young in summer calving grounds as they have for thousands of years. We didn’t see many of them, but we knew they were there, somewhere, galloping in synchronized troops and a thousand times more spaced, without ever jostling each other, the tendons of the legs a veritable orchestra of snapping castanets, the clacking hooves. on the stones. These tawny creatures drift along their ancient paths like tendrils of smoke through one of our last great wild places.

These parks are an essential treasure of our democracy, designed by Congress and past Presidents as monuments to posterity. Now they offer a glimpse into the future of climate change, which has hit the Arctic in a way never before seen in the temperate world.

Unable to sleep one night, I slipped next to my dozing son and emerged from our tent into the surreal soft light of a midnight sunset as a rainbow arched. rose like a bridge sent from the sky over the river. At times like this, I could only think of my two sons and how they and all of our future generations will be left in the face of the uncertainties of a superheated planet.

The Times commits to publish a variety of letters For the publisher. We would love to hear what you think of this article or any of our articles. Here is some tips. And here is our email: [email protected].