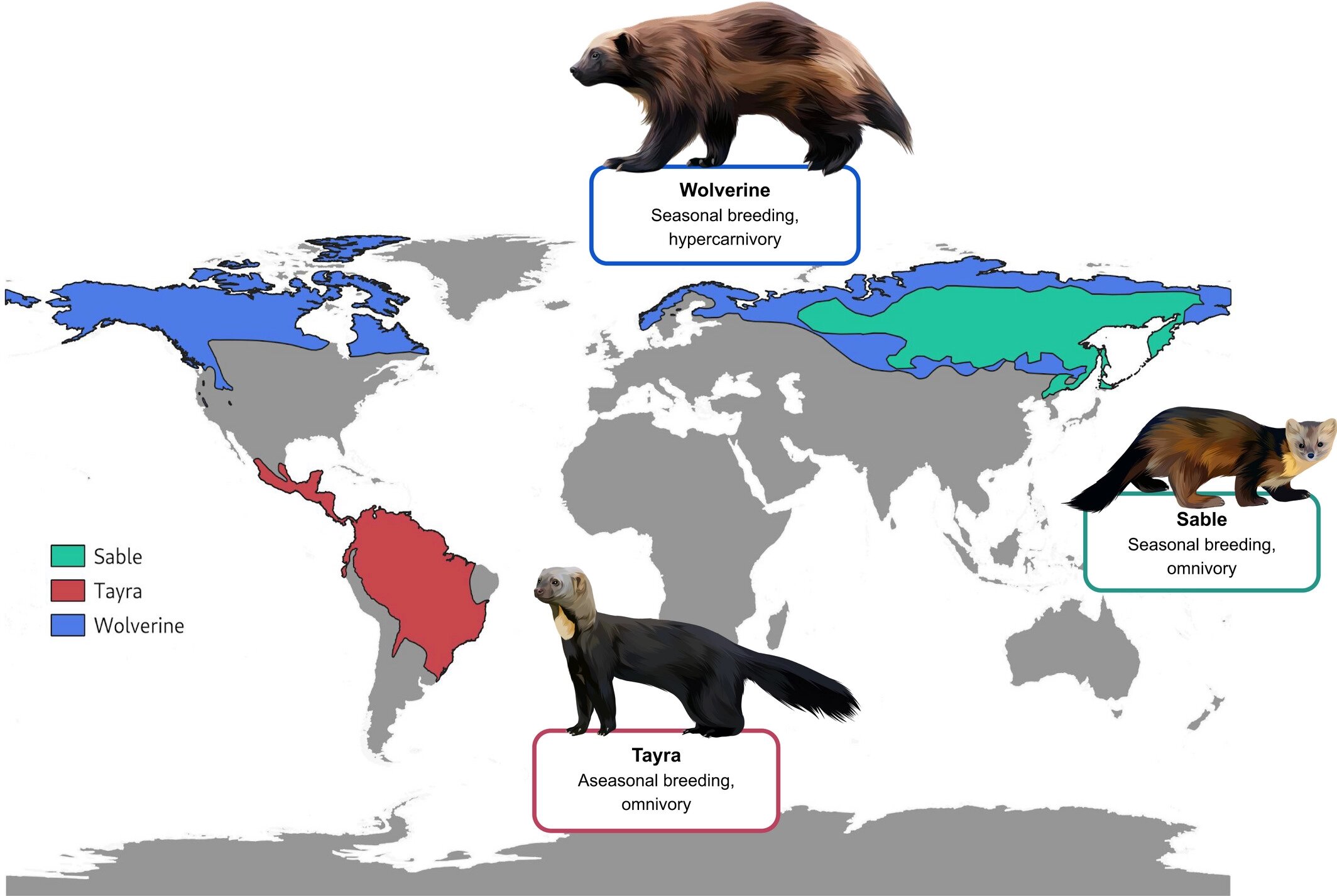 Mustelids are the most ecologically and taxonomically diverse family within the order Carnivora. From tayra in the neotropics to wolverine in the subarctic, they inhabit a variety of ecological niches and have evolved corresponding species-specific traits related to their diet, reproductive strategy, and morphology. An international team of scientists led by the Leibniz Institute for Zoo and Wildlife Research (Leibniz-IZW) conducted a comparative analysis of the entire genomes of several mustelids to gain insights into the molecular basis of these adaptations.

The team found that multiple sources of genomic variation contribute to candidate genes, including those that alter the number, position, orientation, or size of genes in a species’ genome. These latter forms of genomic variation are often overlooked in wildlife genomic studies, and the authors argue that this needs to change. The results are published in the scientific journal Molecular ecology.

The Mustelidae are the most ecologically and taxonomically diverse family within the mammalian order Carnivora and include badgers, ferrets, weasels and otters. Even closely related mustelids often inhabit different ecosystems where they face very different challenges. Consequently, they have evolved a wide variety of species-specific behavioral, morphological, and physiological adaptations related to diet and reproduction. While recent developments in sequencing technologies and analytical methods allow the construction of genome projects for many wildlife species, mustelids offer wildlife geneticists the opportunity to unravel the roots of this diversity by identifying regions of the genome associated with ecologically relevant traits.

“We focused on the Guloninae subfamily, within which several species occupy a variety of ecological niches, ranging from the omnivorous tayra (Eira barbara) in the Neotropics to the carnivorous wolverine (Gulo gulo) in the scarce-resource subarctic. “, explains Lorena Derežanin. , a Ph.D. student at the Department of Evolutionary Genetics at Leibniz-IZW and first author of the paper.

“This is the first study comparing the genomes of ecologically disparate species within this diverse subfamily and sheds light on the evolution of these species,” says Klaus-Peter Koepfli, lead researcher at George University. Mason in the United States and co-author of the study.

The research team produced the first tayra reference genome and compared it to genomes available for wolverine and sable (Martes zibellina), two other members of the Guloninae that are ecologically quite different. They found that not only do ‘single nucleotide variants’, essentially single ‘letter’ changes in the genetic code, contribute to species differences in genes associated with ecologically relevant traits, but that changes to large scale known as structural variants were also important, affecting parts of specific genes or multiple genes.

“Our results are important because they demonstrate that many types of processes responsible for genomic variation need to be considered, including those that can rapidly alter the number and function of genes in a genome,” says Derežanin.

“If we use the metaphor of a book to represent the DNA sequences in a genome, then the kind of changes we are talking about are akin to the deletion, displacement or duplication of large chunks of text, on a scale of paragraphs, pages or even whole chapters”, adds Daniel Förster, scientist at Leibniz-IZW and main author of the article.

The research team identified changes in many genes that could be associated with the different ecologies of the species. For example, in the genome of tayra, the only species of Guloninae that reproduces throughout the year, they found many gene changes related to pregnancy. In the wolverine, a circumpolar carnivore that faces seasonal food scarcity, many altered genes have been linked to diet and fitness.

“In a sense, starving for longer periods of time is part of the wolverines’ way of life, and we have identified candidate genes that allow them to cope with this,” says Jörns Fickel, head of the Leibniz-IZW department of evolutionary genetics. “Generating further genomes for species in this diverse family of mammals will be a solid foundation to help us understand how genomes evolve in response to different environmental challenges.”

New resource could provide clues to clownfish past, present and future

This document is subject to copyright. Except for fair use for purposes of private study or research, no part may be reproduced without written permission. The content is provided for information only.