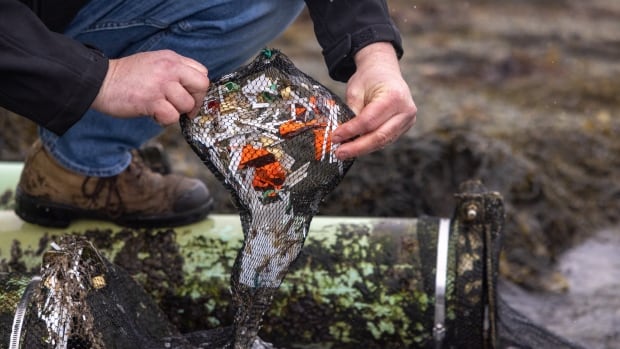 Angela Riley spends most of her days picking up litter on Nova Scotia beaches.

As she combs through rocks and seaweed, she fills her trash bags with plastic, string, glass and thousands of small rubber bands.

These bands, used in lobster fishing to keep the claws closed, are a common find for Riley. She says the problem is getting worse.

“It seems like every shoreline in Nova Scotia tends to have these lobster flocks,” Riley said. “And if you go down to the Bay of Fundy or southwestern Nova Scotia, the Northumberland Strait as well, they just get flooded with it.

“When I say thousands or millions, I’m not exaggerating too much. It’s crazy.”

Riley is the founder of Scotian Shores, a local company dedicated to cleaning up the province’s shorelines.

Two months ago, she discovered a large concentration of lobster strips on the beach near the discharge pipes of a lobster processing plant on Cape Sable Island called Atlantic ChiCan Seafood Ltd.

Riley called the company. To his surprise, they were responsive to his concerns.

Since then, a team from the company has put in place means of controlling the waste discharged by the plant. The team installed screens on the plant’s drains and manholes, and attached homemade pipe sock to the nine discharge pipes that flow into the ocean.

Scott Weare, the plant’s maintenance manager, sewed and installed the socks from a bait net and secured them to the pipes with metal clamps from a hardware store.

Weare said commercial pipe socks can be expensive, but his design costs $20 per sock and 20 minutes to make.

He said the company hopes to be a leader in the industry and inspire others to use the same methods.

“Let’s jump on the ball and get ahead of it,” Weare said. “And then hopefully we can help other people…you know, pass on our knowledge of what we’ve come up with to other people.”

Since the socks were installed two weeks ago, they have picked up a significant amount of trash that would have escaped the grates inside the plant.

“A month ago, that little sandy beach where we were was flooded with little brown paper tags and rubber bands, and…big tags,” Weare said. “And since we were there earlier [today]there were very few on this beach.”

When she began to investigate the tapes on shore, Riley assumed they came from lobster boats, where they are placed on lobsters.

But as she spoke to people in the industry and tracked the places with the highest concentrations, she was surprised by what she found.

“I personally went lobster fishing one day because I had to find out,” Riley said. “[They] took me to some pipes in some processing plants and my jaw hit the ground because they are drained from processing plants. »

She said she didn’t blame all the factories, but she has seen multiple instances of strips and plastic from discharge pipes on the South Shore and Bay of Fundy, where lobster processing is common.

“I think sometimes what happens is a plant can say, ‘Oh, it’s just us. We only publish this number. But then when you go up into the Bay of Fundy and see how much is there, it’s really a combined effort of pollution.”

Riley said he contacted the provincial Department of Environment and Climate Change about the issue, but the department’s response was unclear.

In an emailed statement to CBC News, ministry spokeswoman Tracy Barron said the lobster strips are considered garbage from a provincial perspective.

“We recently received a complaint about the rejection of lobster strips from a pipe from a processing plant,” Barron said. “The department provided the facility with educational materials and contacted the federal agency responsible for regulating these facilities, the Canadian Food Inspection Agency.”

When CBC asked the Canadian Food Inspection Agency about the matter, a spokesperson said the agency had inspected all lobster plants in Nova Scotia for the past five years, “however, the inspection of waste release is not within CFIA’s mandate”.

The spokesperson referred the request to the province.

Department of Fisheries and Aquaculture spokesman Bruce Nunn said in an email that “a specific provision exists in provincial fish inspection regulations that regulate processing facilities. These regulations require that the area and beach surrounding and under the control of an establishment be kept clean.

Nunn did not respond whether the department plans to require measures such as hose socks on discharge pipes to ensure plastics and rubber bands are not released into the marine environment.

Tony Walker, an associate professor at Dalhousie University’s School of Resource and Environmental Studies, said the fact that the lobster strips are concentrated around factories suggests they are not from fishing boats at sea.

“When you get to places where the density or number of lobster flocks is much higher than the rest of the coastline around Nova Scotia, that suggests potential for a local source such as a processing plant,” Walker said.

Mary Blades, quality control supervisor at Atlantic ChiCan Seafood and one of the team members, said the rings aren’t supposed to come off the lobsters in the processing plant, but they often do.

“We store the lobsters in the tank with bands on them and sometimes when they come out they don’t have bands on them, get away from the artists,” she said.

The strips then end up on the bottom of the tanks, which are periodically cleaned and discharged into the ocean, or on the factory floor, which is washed down the drains at the end of the day.

According to Blades, along with the tapes, plastic tags attached to storage crates that identify the date and source of the lobsters are also common debris.

“Going in and out of the water, in currents and such, it could take the labels off the crates or whatever and it would sink to the bottom,” Blades said. “And we go through thousands of crates here. So when it comes time to clean your drain, the water and all the garbage that’s collected at the bottom goes down the drain.”

Walker said the fact that these plastics are being pushed out by processing plants is concerning.

“Everything man-made in the environment, especially the marine environment, should be something to [be concerned] around,” he said.

He pointed out that some rubber band manufacturers say their product is “biodegradable,” leading to a common misconception that it doesn’t harm the environment. He said that under ideal conditions, the tapes could take up to 15 years to break down.

“The rubber band itself could be ingested by marine wildlife or seabirds, preventing food ingestion, so the organisms could still die,” Walker said. “Or if the tapes continue to degrade and form small particles like microplastics or micro-rubber particles…they could also be ingested by even smaller marine organisms.”

In a statement, Geoff Irvine, executive director of Lobster County of Canada, said he had never heard of pipe socks, “but it’s a great idea and we encourage everyone in the industry to do so. their part to reduce the amount of waste that finds its way from fishing boats and processing plants.”

Blades said she has worked in the lobster industry for more than 20 years and had never heard of source pollution mitigation until this year.

She said she thinks it’s taken processing plants so long to figure out this problem because the garbage is “out of sight, out of mind”.

Weare said there are more than 15 fish processing plants on Cape Sable Island alone, so even starting small with pipe socks in the region could make a huge difference.

“My wife and I and the family love to walk on the beach. And, you know, we don’t want to see rubber bands and tags and everything else… We want to be proud of our beaches.

“I’ll happily do the socks if the guys want to put them on.”

Riley said she was happy to see the beginnings of change and hopes processing plants will take up her offer.

“I come from a fishing family. I went fishing. So I don’t want to attack the industry,” she said. “I just want us to do better.”