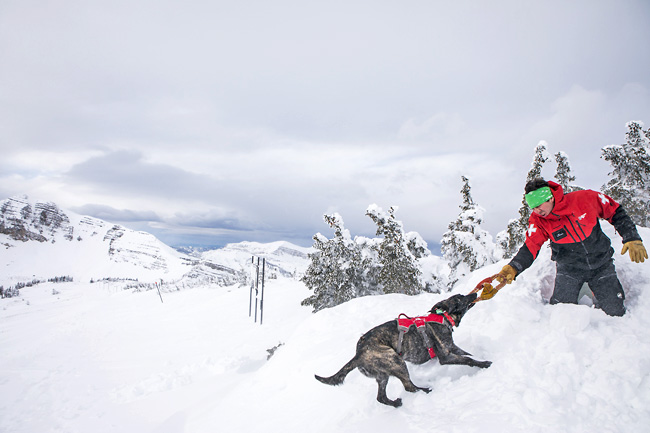 THE WASHINGTON POST — It’s quiet in the Jackson Hole Mountain Resort staff locker room at noon. Most of the ski instructors, chairlifts and patrollers are in the field. Then, a whistle sounded, sending a leaping two-year-old Dutch Shepherd, Cache, sprinting down the driveway and around the corner.

Like the other staff at the bustling Wyoming ski resort, Cache keeps the mountain safe. She is one of six members of the Jackson Hole Patrol Dogs team, which assists the Ski Patrol in avalanche rescue efforts. If someone is buried under snow, highly trained dogs such as Cache identify their location so a rescue can begin.

At the end of the aisle in the locker room, Cache finds the source of the whistle: its owner, Chris Brindisi, a certified search handler who has been with the Jackson Hole Ski Patrol since 2000. The couple leave the locker room. and go in the snow.

Outside, Cache jumps up and runs around Brindisi, begging him to play tug of war with a chew toy in his mouth. Playing tug is fun for her. This is also part of his rescue training.

“When they’re playing tug like that, it’s like they’re ripping the leg off an elk they’ve just killed and they’re fighting over the biggest chunk,” said Scott Stolte, assistant director of the Jackson Hole Ski Patrol. “It ignites them.”

Stolte and Brindisi and other avalanche rescue dog trainers incorporate the tug as a reward in training, in addition to much praise. Over years of training, avalanche dogs learn that finding someone buried in the snow means getting rewards. 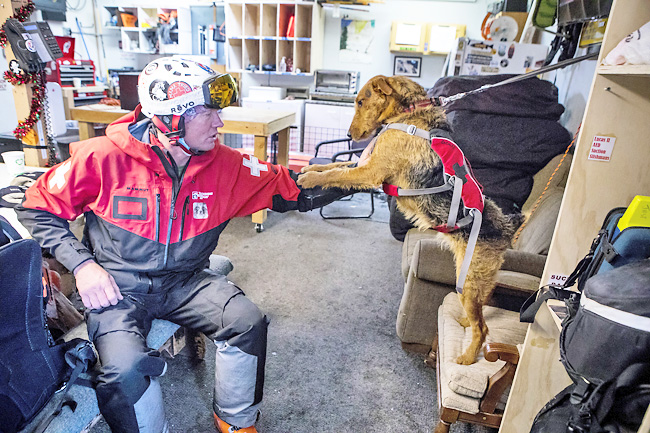 “Even avalanche rescue at the highest level, for the dog, it’s a game,” Stolte said. “The game is this: I’m going to get the person buried in the snow…the reward is they’re going to find someone and they’re going to play tug with me.”

Avalanche dogs are said to date back to the 1700s, when St Bernards accompanied Swiss monks between monasteries. Today, avalanche dogs help search and rescue teams around the world – from alpine villages in France to the Annapurna mountains in Nepal. In the United States (US), they are primarily employed by ski resorts and non-profit organizations. The stories of the dogs are heroic, as in the rescue of a ski lift operator in 1982 who survived five days buried under tons of snow.

The job of an avalanche dog is to find someone buried in the snow. Their digging is a signal to the rescue patrol as to where the victim is buried. Next, a member of the patrol begins the extrication process, which Stolte describes as one of the most difficult physical tasks. You might think snow is light and fluffy, “but after it’s gone through an avalanche and been worked through, hardened by friction, movement and fluidity, it settles like concrete,” Brindisi explained.

Some of Jackson Hole’s patrol dogs include Ziggy, an American Highland Labrador; Sparrow, an Airedale terrier; Scout, an American Labrador; and Sable, a Boykin spaniel. There isn’t one breed for an avalanche dog, but most are female and a bit smaller, around 50 pounds, so they can easily be carried on the shoulders of a ski patroller. But many types of dogs can adapt if they can handle the cold.

Brindisi is looking for working breed dogs. “Dogs that really want to please. They want a job,” he said. “We want a dog that will work for more work.”

They must have an insatiable enthusiasm and “go crazy” when it’s time to put on the vest and put themselves in danger. Dogs will learn to ride snowmobiles and toboggans, stay calm on the shoulders of a patroller as they ski down a mountain, ride chairlifts, and of course, use their noses to find people . It can be to detect the smell of a person’s dead skin cells, their stress or their breath.

Dogs should also be extremely gentle with strangers, especially children. They will spend days wandering the resort and stopping at ski schools where students risk running over the dogs. There can be no risk of the dog biting; they must love people.

“The more they find out that people are super fun and wonderful and awesome, the more they want to find you,” Brindisi said.

Not all dogs will pass avalanche rescue training. Brindisi recently had the painful experience of removing a dog from the training program and finding him a new home. After spending three years together, it wasn’t easy for him.

“As a manager and a coach, you want to think you can troubleshoot and solve problems, and to some extent you can,” he said. “But it was a square peg in a round hole. It did not work.

With devices like avalanche beacons and probes, using dogs to find people buried in snow can seem antiquated. But despite all the new technology available to a patrol, Stolte said, dogs still remain an industry standard.

They are particularly essential when there is an avalanche without witnesses and it is not known if someone is trapped. A dog like Cache could roam acres of avalanche path and quickly determine if someone is buried.

“The alternative would be 23 patrol boats lined up in single file with probes pushing through the snow to see if we find anyone, which can take hours and hours and hours and is extremely difficult and not great,” said said Stolte.

Avalanche dogs won’t be out of work anytime soon. On the contrary, they could be more in demand in the years to come if the avalanche statistics continue their upward trajectory.

According to Avalanche.org, which collects data from forecast centers, there have been eight avalanche fatalities in the United States so far this season. During the 2020-2021 season, the site reported 37 deaths, compared to 23 the previous season.

But the protection of skiers, snowboarders and mountain workers against the risk of avalanche begins long before the rescue dogs are called.

The night before the resort opens, avalanche forecasters assess how much snow, wind and precipitation the mountain could receive. Then they will come up with an action plan for the ski patrol to address in the morning. Jackson Hole Mountain Resort has hundreds of different avalanche paths which are divided into 10 different connecting routes.

According to forecasts, reducing avalanche risk may involve using explosives to trigger avalanches, putting ski slopes in the snow or simply going out to assess potential risks in person.

“But when we know we have a lot of snow and wind, we will use explosives,” Brindisi said.

A team will come early to prepare the demilitarized explosives, take them out of their secure stores and prepare them to test the slopes and break up the dangerous slabs that have formed overnight. If all goes according to plan, the team can open the mountain to customers before 9:00 am.

It can be a difficult and hostile work environment.

“We can go up in the morning and push from the top in near darkness with 70 mph winds, and you come down (the mountain) with explosives trying to set off avalanches,” Stolte said.

For patrollers like Stolte and Brindisi, there’s also the added complication of bringing their dogs.

“It’s like bringing a two-year-old to work every day,” Brindisi said.

Cache’s original life plan was to go to the Penn Vet Working Dog Center, where she would train for a career in one of many different disciplines, from law enforcement work to cancer detection. Her brother is a police dog in Philadelphia and her sister is an accelerator detector dog for the New York City Fire Department who helps determine if a fire was an accident or arson.

When the pandemic hit, Penn Vet shut down and Cache was suddenly a free agent. Brindisi was looking for a dog to start training when he heard about the Dutch Shepherd available.

He contacted his owner, a Michigan veterinarian, at the perfect time.

Brindisi drove from Wyoming to Michigan to collect Cache, sleeping in his van along the way. Now Brindisi has been hosting, caring for and training Cache for about two years in Jackson. Living and working together, their bond goes beyond their professional relationship.

8 Siberian Husky Facts You May Not Know About This Breed

Is San Antonio FloatMe a Safer Alternative to Payday Loans?