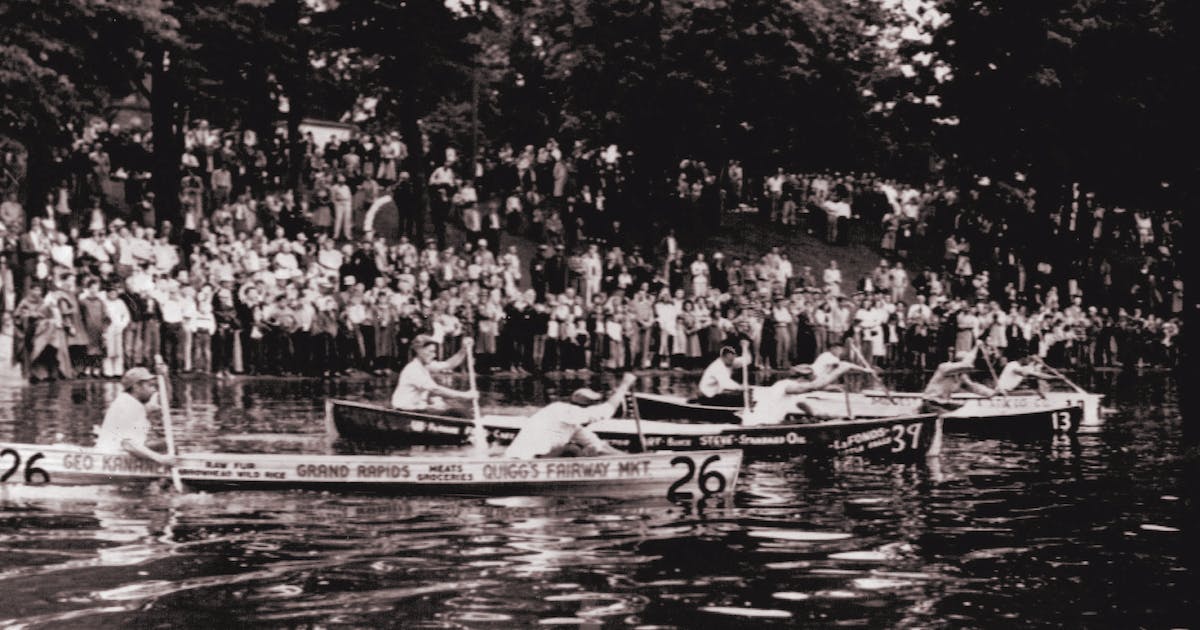 ‘It’s a Minnesota thing’: Canoe racing’s popular past ties in with the present

When paddlers of all abilities glide down the Mississippi River for a weekend of canoe races in early summer, they’re diving into an activity that has traversed state waters for generations.

Canoe racing doesn’t get the ink of other big sports like the Minnesota Twins or even related recreational activities like Boundary Waters Adventures – but in simpler times it generated front-page material for the masses.

The 83-year-old Minneapolis Aquatennial summer celebration played a major role. His 450-mile Paul Bunyan “canoe derby” from Bemidji to Minneapolis was widely acclaimed. His arrival, too – when exhausted paddlers floated through town – marked the official start of the Aquatennial. The marathon made canoe racers like Tom Estes and Eugene Jensen into sporting stars in their own right.

Their predecessors also attracted a lot of interest according to published accounts. The 1941 Paul Bunyan Derby was won by two Chicagoans, Howie Oslund and Bob Robinson, who arrived in nearly 66 hours, their final sprint watched by 100,000 people lining the banks of the Washington River at Franklin Avenues.

Canoe racing ended in the early 1960s, but racing? Far from there. It’s a heritage activity with a loyal base — like fishing or hunting or Nordic skiing — that helps define the state’s outdoor life. Front-page headlines have faded from memory, but the desire to take the plunge in the state and across North America continues unabated.

Longtime friends and paddlers Scott Miller and Todd Foster have a ready-made audience for their new events in June, but they’re also hoping to attract newcomers. Both channeled their passion for canoeing long distances into the two-paddle canoe and kayak races June 10-12 on the Mississippi River.

Two Paddles includes multiple runs, ranging from 140 miles (from Brainerd to Coon Rapids) to 7 1/2 miles. The main event, called the MR 140, begins on June 10 and features nighttime paddling and portaging, in line with other national canoe races – obscure to the general public but revered in the tight-knit canoe racing community. . Currently, there are 58 registrants for the MR 140 from 15 states and Manitoba, Canada, Miller said, and among them is a paddleboarder. Racing solo, tandem or in teams, they will finish at Coon Rapids Dam Regional Park, the ultimate end point for all Two Paddles events on June 12.

The 7 ½ mile event is considered a recreational outing and includes shuttle service. Participants will paddle from Coon Rapids to Minneapolis and be driven back to the regional park and post-race party.

Miller loves making headlines. Last year, he and three others attempted to break the speed record for a paddle of the Mississippi River from start to finish – from Lake Itasca to the Gulf of Mexico. (He and a new team will make another attempt in 2023 after the 2021 trial capsized – literally – hours after reaching New Orleans.) Miller is also a veteran of high-profile races like the Missouri 340, the most the world’s longest continuing paddle race and, he says, its “egalitarian” approach that draws small river towns into favor. That vibe of all comers, even in something so grueling, inspired Two Paddles weekend, Miller said, and what it could become.

But Miller also looks back, with a nod to the glory years of Minnesota racing like those of the Paul Bunyan.

“I feel that we are reviving this a bit,” he added.

The race to the heart

MCA’s involvement is relevant since the origin of the group is canoe racing. Friends in 1961 formed the MCA while seeking to band together around their business and grow as runners. Today, it remains rooted in racing while offering lessons in areas like kayaking and whitewater canoeing, said President Emily Broderson. There are 305 members.

Like any sport, training is the basis of the MCA. There are weekly get-togethers and even Rookie nights in the summer to focus on things like efficient swimming technique, how to handle racing canoes built for speed, and how to hone strategies like the writing of others.

They use the Rum River at Anoka, areas of Mississippi, and the Rice Creek Range at Lino Lakes, among others. And this summer, a tradition will resume after a pandemic hiatus: Hoigaard will host Thursday night training on the Chain of Lakes in Minneapolis.

All of these efforts will also propel Minnesota riders into out-of-state events. The sport’s triple crown is coveted: the General Clinton Canoe Regatta, a one-day 70-mile race on New York’s Susquehanna River in May; the Au Sable River Canoe Marathon, 120 miles on the Au Sable River in Michigan in July; and La Classique, aka The Classic, on the Saint-Maurice River in Quebec, 125 miles and three days in September.

Anoka’s Steve Peterson is a familiar face at MCA outings, a direct link to the long range of Minnesota canoe racing. Peterson’s father, Irvin (aka Buzz), rode several Paul Bunyan derbies and traveled to Canada to race. His dad was a bow paddler, and Steve was next in line if a sparring partner was missing. Peterson remembers jumping back when he was 10 years old.

Peterson said the competition was just as intense out of the water, with pioneers like Jensen focusing on designing the fastest canoe or creating the lightest paddle. Wenonah Canoe retired several Jensen-designed models that are still go-to boats among racers.

Peterson’s racing resume includes events across the country and in parts of Canada (including all three before they were linked as the Triple Crown). He and his wife Bonnie paddled the Classic in 1977. Bonnie was the first woman at the time to compete in the race.

The racing lot is a separate breed, he said. Paddling comfortably in boundary waters, it is not.

“You need a certain person,” Peterson said, “because it’s hard.”

While the intensity and skill involved are timeless, the makeup of the runners has diversified over the decades. More women in the sport have made it better, Peterson said.

“We really like each other…there’s a lot of socializing rather than fighting,” he added.

Broderson, the president of MCA, agreed on camaraderie. She said the common DNA of active members, whether they commit to training every week or are part of the pocket that races in North America, is the level of investment.

And that partly helps explain the longevity of canoe racing years after the bright lights of public celebrations have faded.

“It’s a Minnesota thing,” she said.