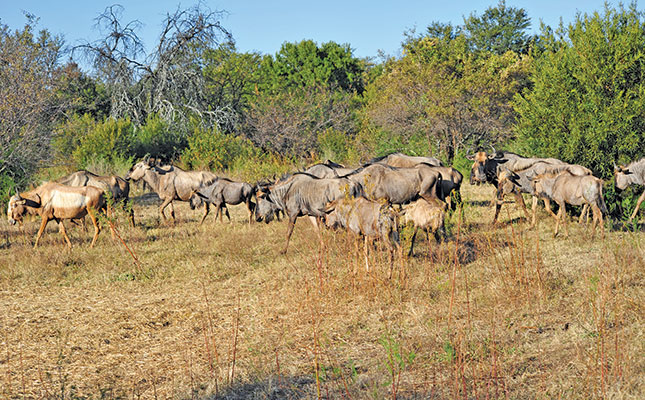 Hunting on the southern slope of the Magaliesberg

Kareekloof Game Farm is located less than 140 km from Johannesburg, close to the small town of Derby in the northwest.

According to the owners, Leon and Annalize Prinsloo, they fell in love with the farm at first sight in 2001, and signed the offer to purchase on the spot.

â€œWe have enlarged the property several times since and it now covers 1,400 ha of this rugged, mountainous terrain on the southern slope of the Magaliesberg,â€ explains Leon.

â€œWe enlarged and repaired the dilapidated little house we found here when we bought the farm and added several buildings to accommodate the hunters and their families,â€ adds Annalize.

“We opened our doors for overnight guests in 2007.”

Leon says they started raising game from the time the game fences were in place. â€œIn today’s economic climate, you have to diversify, and there’s no question that agrotourism, game farming and hunting are a comfortable ‘marriage’,â€ he says.

Game breeding and hunting
â€œWe breed a variety of game, like the sand antelope, but our niche is the more exotic species, for example the white blesbok, golden wildebeest and black impala,â€ says Leon.

â€œWe keep game for breeding, some for trophy hunting, some for meat hunting, and the rest that we sell. Due to the terrain and the thick bush, bow hunting from skins is best for us. We have eight hides in total, consisting of towers and pits, spread across the farm.

â€œA typical day of hunting started with dropping the hunters into the hides. They are not allowed to leave the hideouts until they have killed or arrested an animal. When they shoot something, they call for it and I go out with my fox terrier Penny, who I trained to hunt down injured animals. Once we find the animal, we take it back to the slaughterhouse and meat processing facilities on our farm, where hunters can choose to process it themselves or let Annalize do it for them â€ , he explains.

There are many health benefits of eating game, and the Prinsloos have been advocating this type of diet for several years.

â€œWe also raise a herd of cattle, and we use them primarily for parasite control.

â€œThe Nguni and Boran breeds are resistant to ticks and easy to treat. During the summer months, we let the cattle enter our hunting camps where they attract ticks, thus reducing the burden on our game. The offspring of these cattle are also used for consumption, and the rest is sold, â€says Leon.

Comfortable accommodation
Kareekloof offers several types of accommodation (cabins, lodge rooms and an entire farm), and these are not only suitable for hunters, but also for couples and families looking for a weekend getaway.

â€œOn the weekends we have many guests who are completely amazed when we take them on safari. For some adults who visit us from the city, this is their first experience of getting up close to wildlife like giraffe, kudu and sable. Few people want to leave after a weekend here, and all of our visitors arrive as customers and leave as friends, â€Annalize expresses.

â€œThere is a TV in the common living room, but none in the bedrooms and chalets. Mobile phone reception is also limited here. We want visitors to disconnect from technology and instead connect with nature when they visit us, â€she adds.

The accommodation can accommodate between two and 10 people per unit, and all units except the two smaller ones, which only have coffee stations, are independent.

Kareekloof also has a venue that can be used for weddings and meetings with a maximum of 50 guests, as well as conferences and workshops with up to 80 participants. A total of 39 people can be accommodated in the units when occupied by families, and 26 for conferences.

â€œA campsite is also available during the summer months, but we limit the number of campers to ensure peace and quiet. In addition, two log cabins on the campsite can also be booked, each accommodating up to 10 people, â€explains Annalize.

â€œThe log cabins are only equipped with beds and mattresses. Electricity is available at the campsite, but only for lighting. Water for drinking and cooking is boiled over a fire, hot water for showers is heated by solar energy, and there is a donkey water heater as a backup.

Activities and curiosities
Hunting is not a prerequisite at Kareekloof Game Farm. Guests can also relax by the pool and game drives can be arranged.

It is also located on a site of interest for history buffs: during the Anglo-Boer War many battles were fought in the area, and a multitude of artifacts from this era have been found on the farm.

â€œI often invite guests to accompany me on regular outings of agricultural work throughout the farm. From time to time, some children do not take the opportunity while their siblings do, only to regret it once they come back and hear how much fun they had â€, laughs Leon.

Visitors should bring their mountain bikes, as they can explore the farm on foot or by bicycle.

Leon explains that they have counted more than 17 species of mammals on the farm, including predators like the brown hyena and the caracal. “In my experience, these predators, including the leopard, would rather make room for you than try to attack.”

You can also explore the surrounding area. Sun City and the Maropeng Visitor Center are approximately 75 km from the farm, while the Pilanesberg National Park is approximately 90 km away. Fuel, meat and groceries can be purchased in Derby, just 8 km away.

NORAD shows when it comes to town