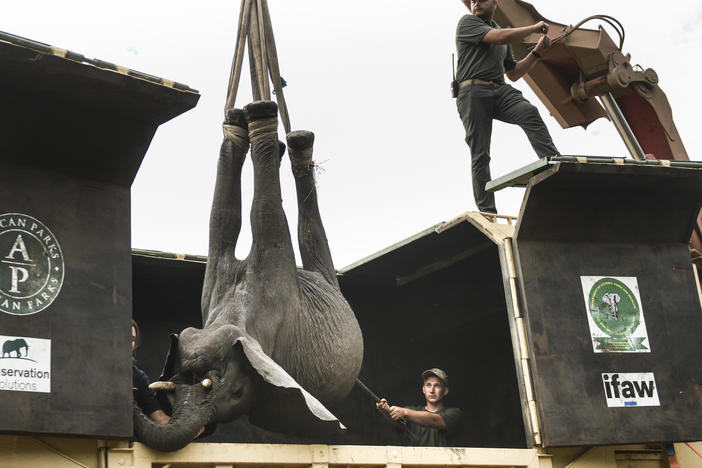 How do you move 250 elephants to their new home? very carefully

LIWONDE NATIONAL PARK, Malawi – A tranquilized baby elephant is hoisted into the air and gently placed in a large truck that will take it to a new home.

One by one, 250 elephants are being moved from Malawi’s overcrowded Liwonde National Park to the much larger Kasungu Park, 380 kilometers (236 miles) in the north of the country.

The elephants are tracked around the park and darts are fired to calm them down. While they sleep, they are moved in the big trucks that take them to Kusungu Park.

So far, at least 40 elephants have been relocated and the rest are expected to leave by the end of the month at a total cost of around $1.5-2 million, officials say. In addition, around 405 other wildlife including buffaloes, impalas, sables, warthogs and waterbucks will be relocated to Kasungu.

The whole process is a cooperation between the Department of National Parks and Wildlife of Malawi, the International Fund for Animal Welfare and African Parks.

“This will establish viable elephant populations and ensure the prosperity of local communities living around the parks. It will also alleviate pressure on habitat and reduce human-wildlife conflict,” the African representative said. Parks in Malawi, Sam Kamoto.

African Parks is a non-profit organization that manages and rehabilitates national parks in partnership with governments and local communities. The group currently manages 20 national parks and protected areas in 11 African countries, including Malawi.

Since 2015, Liwonde National Park has been managed by African Parks which discovered that its more than 600 elephants were threatening the park’s vegetation and biodiversity.

Liwonde’s 548 square kilometers (211 sq mi) of floodplains, lagoons and forests are home to over 400 species of birds and numerous mammals. But its elephants, reproducing at the rate of 10% a year, could soon overwhelm the park, experts say.

In contrast, Kasungu National Park is about four times larger at 2,100 square kilometers (810 square miles) but has far fewer wildlife. Kasungu once had around 1,200 elephants, but years of poaching reduced their numbers to around 49 in 2015, park officials said.

Since then, Malawi’s national parks and international groups, including the United States Agency for International Development, have worked together to improve elephant protection, and the elephant population in Kasungu Park has grown to around 120. Introduction of 250 Liwonde elephants will promote population viability in Kasungu, he said.

“The translocation of elephants and other wildlife is a significant achievement and proves that the national parks’ approach to working with partners to secure their natural resources is sound,” said Patricio Ndadzela, a Malawi representative of the Fund. international for the protection of animals. .

A 40 kilometer (25 mile) elephant proof fence has been constructed along the eastern boundary of Kasungu Park to prevent elephants from straying into farmland and will prevent conflicts between communities and elephants , Ndadzela said.

Restoring Kasungu’s elephant population will enhance its appeal as a tourist destination and in turn improve the local economy, he said.

This is not the first time large numbers of elephants have been moved from one park to another in Malawi. In 2016, African Parks moved 520 elephants to Nkhotakota Wildlife Reserve.