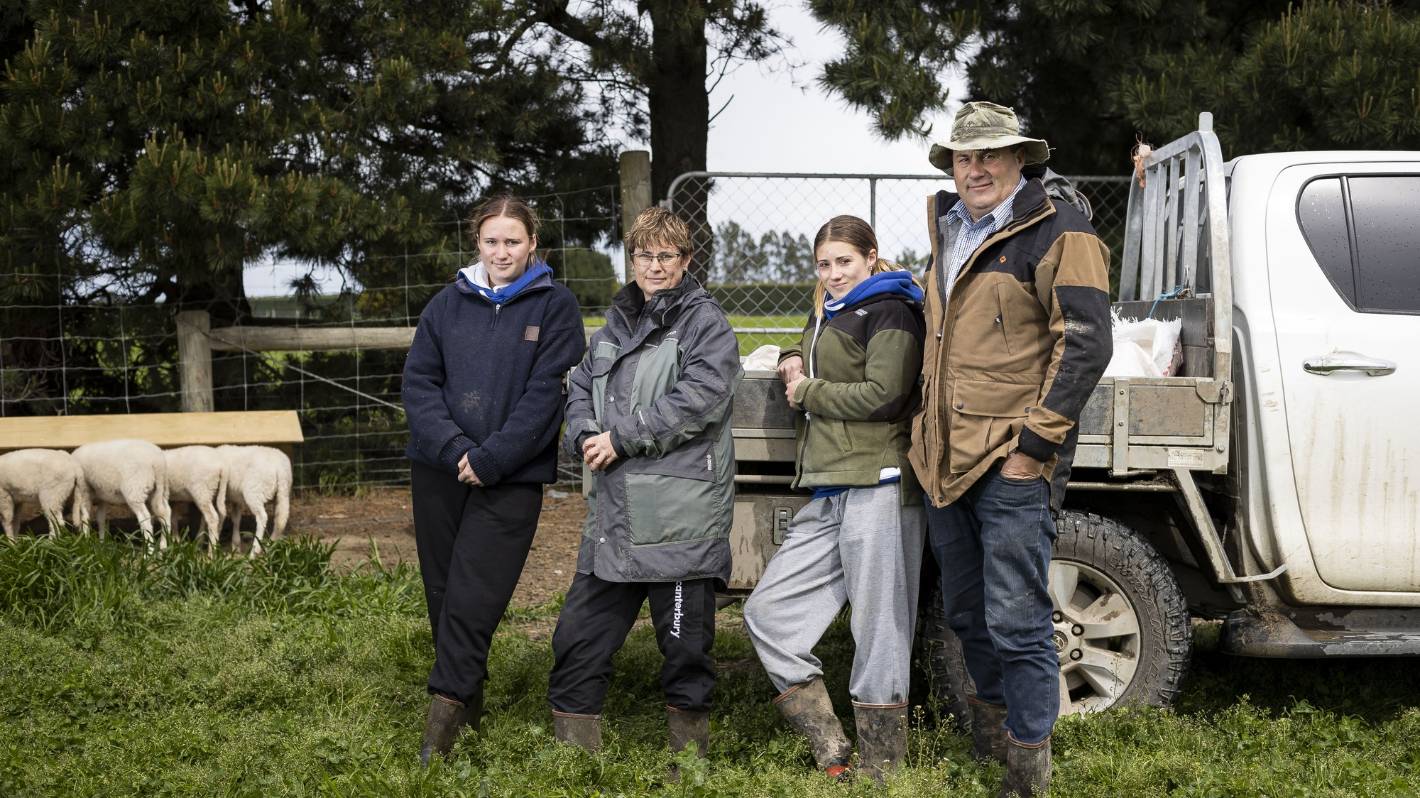 Tracey and Matt Jones with their daughters Sam, left, and Gabrielle, whose food intolerances led to their sheep milk business.

Sheep’s milk is important to the Jones family. It was a game-changer for her daughter Gabrielle’s health, and building on that experience made her an integral part of Canterbury’s future success.

“Sheep [milk] the cheeses are so much smoother, â€says Tracey Jones, half of the husband and wife team, pioneering a new kind of farming on the South Island.

â€œThey’re so much gentler on your tummy. They have more flavor. It’s not just your regular cheese. It’s hard to describe until you’ve tasted it.

The Jones family farm sits on the main road from Darfield to Kirwee, sandwiched between the braids of the Waimakariri and RÄkaia rivers, where they milk more than 500 sheep. The farm has even become a brand with its havarti and gouda, bottled milk and skincare products.

READ MORE:
* Urgent action is needed to limit the spread of carbon forestry and save sheep and cattle lands, farmers say
* A farmer asks the question: Why are dairy products so expensive here?
* The other dairy export is not shy about growth

It all started when Tracey and her husband Matt had to deal with the fact that their little girl Gabrielle, now 15, had health problems.

â€œWhen I was little,â€ Tracey says, going back further, â€œI had allergies all over the show. In the spring, I was not allowed to go out because I went out to beehives. I had to bathe in pine oil every day. So when my youngest, Gabrielle, was diagnosed with gluten intolerance and then obviously dairy intolerant, that’s when I thought it must have come from me.

â€œShe was made with goat’s milk, which as you know can smell and taste like a goat, and I thought there really must be something better than that. So we did a lot of research and found sheep’s milk, which was right on our doorstep. “

â€œWhen we moved here in 2011 we brought our first stallion from East Frisia. We started with 15 sheep and slowly progressed until early 2019 when we asked what we were actually going to do with these sheep. If we had to milk them, let’s do it!

“In six months, we had our shed and put on cups, and we’ve never stopped milking since.”

Tracey and Matt have been married for 20 years. â€œMatt was taking a farm cadet course, which my brother was also taking, but we split up because we were both young teens at the time. Then we saw each other again in our early twenties and have never separated since.

They now have three daughters, Annabelle, 19, Samantha, 17, and Gabrielle, and the family-owned sheep milk skin care brand – Sabelle – is a combination of their names.

The Jones family’s flock of sheep is particularly suited to New Zealand conditions. These are the East Frisians, the French Manech and the Mountain Awassi, all of which are dairy breeds.

â€œSheep are so much easier to milk. They only have two pacifiers, â€she says.

â€œThey are happy in the hangar. They are pleasant to deal with. Because ours are hand raised, they scramble to enter the shed to talk to you.

Matt and Tracey are supported by the farm manager and chief cheese maker, Juan Cavallotti. Originally from Uruguay, his heritage is Italian, coming from a family that has treated sheep for generations.

â€œHe sings to them in Spanish,â€ Tracey says. â€œHe thinks it makes them give more milk. A cow is just a number, but by nature he knows all the sheep on our farm.

At a time when New Zealand is reassessing its farming practices, Matt and Tracey also know their herd makes green sense. Five sheep produce roughly the same amount of milk solids as a cow, with one-third of the methane emissions. They are also easier on the ground, and their droppings are less destructive on pastures and streams.

â€œWe think they’re at least 70 percent better on earth. We don’t have a “mud town” type problem at all.

From an idea born out of dietary necessity, the Joneses created a thriving business, now comprising several farms, and soon branching out into infant formula.

It was once said that New Zealand was built on wool from the backs of sheep. Today, it appears that sheep’s milk is a cost-effective, health-conscious choice that makes real ecological sense.