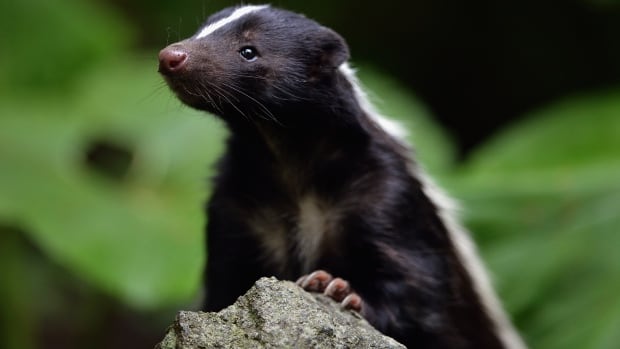 Skunks are so prevalent in Prince Edward Island that Islanders might be surprised they weren’t always there.

Although the island is a perfect habitat for small creatures, they did not migrate until the disappearance of the land bridge that connected the province to the mainland.

In fact, skunks were introduced to Prince Edward Island only about a century ago by humans looking to make a quick buck.

The reason someone would want to import what most people today consider to be a pest has to do with two things: red foxes and the world of high fashion.

â€œWe didn’t have skunks, but we had foxes. And the red fox has a mutant strainâ€¦ which produces black fox fur,â€ said UPEI history professor Ed MacDonald.

“And in the late 1800s, because it was so rare and the fur was so beautiful and shiny and the black fur had silvery guard hairs, slightly longer hairs, and that guard hairs gave to the black fox a silvery sheen, it was the height of fashion. “

Charles Dalton and Robert Oulton were two businessmen looking to get some of that money, and they managed to do on the island what no one had been able to do before: they convinced the foxes to breed in captivity. .

The partners managed to do this on a ranch on a small island near Alberton, where they recreated wild fox dens and kept the animals as far away from humans, noise and other disturbances as possible.

“They invented fox farming in Canada, and they made a ton of money, along with a few colleagues,” MacDonald said.

Eventually the two men and a handful of their partners formed the ‘Big Six’ in western Prince Edward Island and cornered the market for high quality fox furs, controlling the supply of agreeing not to sell their live foxes to strangers.

â€œThey tried to keep what they were doing a secret,â€ MacDonald said. “So people suspected that they were breeding foxes, and that’s why they suddenly had this guaranteed supply of high quality fur, rather than being able to trap these … random black foxes.” ”

“But eventually, around 1910, the monopoly was broken and it started a fox boom.”

Once the secrets of domestication were revealed, there was a frenzy of investment in the industry. Those looking to start their own farm could pay around $ 5,000 for a pair of foxes.

â€œPeople were trading beautiful homes, mansions for living foxes,â€ MacDonald said. “I think the biggest sum I heard was $ 20,000 for a pair of breeding black foxes.”

The boom has also led to an increase in the number of cheaper alternatives and imitations of fox fur, including those made from skunk.

â€œThe only problem is we didn’t have one in Prince Edward Island.

Some islanders began to import striped skunks for breeding on farms, selectively breeding the animals to eliminate their distinctive white stripe as much as possible.

“[The pelts were] marketed not as a skunk, but generally as a sable, which is, I guess, a nobler animal than the skunk, â€MacDonald said.

While the increased supply of fox fur had caused prices to drop from astronomical levels in the 1900s, skunk facsimiles were still much cheaper. A single skunk skin sold for between $ 8 and $ 12, while fox skins sold for between $ 300 and $ 400 at the low end.

Eventually World War I took place and the global fur market collapsed. The skunk farms could not survive the crash.

“Rather than feed the skunks … which couldn’t be sold or peeled, the farmers released them,” MacDonald said.

“So they took the habitat like a duck in the water and they multiplied quickly in the wild, and they quickly became a nuisance. So much so that a bounty was put on their head, and that didn’t really affect the skunks at all. ”

As for the fox farming industry, it managed to do well for decades to come. But he ended up succumbing to the whims of fashion and the markets.

They settled in the habitat like a duck in water and multiplied rapidly in the wild, and quickly became a nuisance.– Ed MacDonald

The taste for high fashion furs has gone from black to platinum and white, so they are out of fashion. But they were dated in part because there were too many black fox furs on the market, and the furs weren’t as good as new producers weren’t as quality conscious.

Prince Edward Island foxes have managed to do well out of captivity in the meantime, becoming a relatively common sight in the suburbs.

“Every time I walked [my old neighborhood], there was a black fox that lived in the neighborhood and you would see him sitting on that guy’s lawn a few feet from the sidewalk, â€MacDonald said.