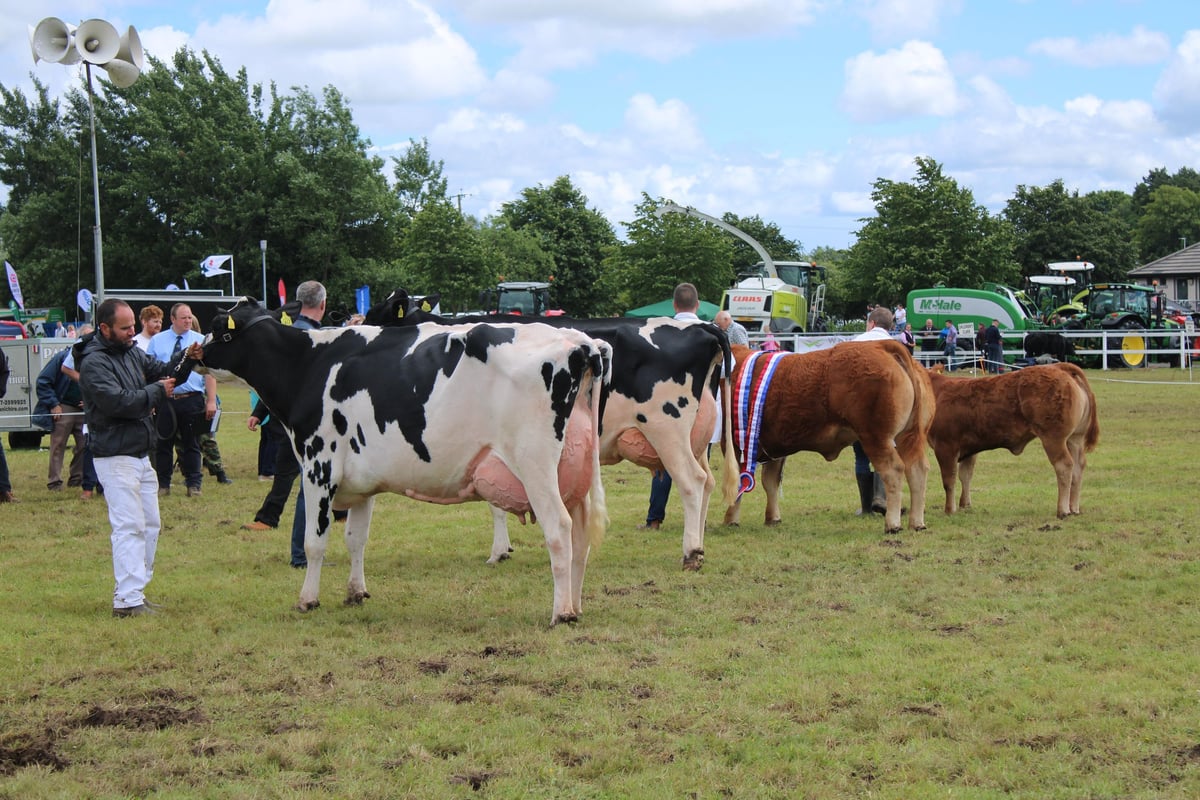 Showcasing the best of local agriculture, the event kicked off on Friday July 1 with a full range of horse show classes, including ponies and mounted horses, in-hand competitions and a range of qualifiers.

Pony and horse jumping thrilled the crowds on Friday and Saturday, with the Ulster Region Grand Prix proving the highlight of day two.

On Saturday, cattle, sheep, goats and poultry took to the rings (and cages!) at the Showgrounds, Gillygooley Road, vying for the applause of champions.

The Interbreed Dairy Champion title went to a Holstein cow owned by Jason Booth of Stewartstown, with Judge Wallace Gregg describing his choice of champion as a “really good dairy cow that just got the edge over the reserve”.

In the beef department, it was a limo heifer owned by Conor and Ryan Mulholland that caught the eye of Aberdeen man, Neil Barclay.

Mr Barclay, from the Harestone herd, chose another Limousin as the reserve crossbreed champion, this time a calf owned by Crawford Brothers, Maguiresbridge.

The honor of Tyrone Beef Champion, meanwhile, went to the Salers of the Elliott family.

The champion of champions was highly anticipated, with the judge, well-known auctioneer Glyn Lucas, patting the Holstein cow owned by Jason Booth – a clean sweep for the Stewartstown man.

“It’s a great privilege to be invited to Omagh’s 180th show and great to see the longevity of this event,” said Glyn Lucas.

“These are four beautiful animals. There are two Holstein cows.

“This white Holstein is a fourth lactation cow. She moves exceptionally well and represents the breed with great class.

“The Limousin calf also has a bright future ahead of it.

Settling on the Holstein as the champion of champions, Mr Lucas explained how the dairy champion had the advantage due to her age and had “proven herself” after four calves.

The younger generation also enjoyed their time in the ring, with Keziah Shaw and her Hereford winning in the Young Handler section of beef.

In the Dairy Junior Showing classes, there was stiff competition in the under-eight and over-eight competitions.

In the end, it was Sarah Berry who clinched the championship title, with Oliver Booth earning the honor of reserve champion.

As for the sheep, the champion crosses, a Texel ewe owned by Martin McConville, was carefully chosen by Judge Kevin Burke, of Cumbria, while the reserve was awarded to a North Country Cheviot.

“It’s the end of our 180th Omagh show and we couldn’t have asked for a better day!

“We hope you all enjoyed your day with us and look forward to welcoming you back next year.

“We would like to thank our committee members, traders, sponsors and everyone involved who worked hard to ensure a great day for everyone,” they said.

Judge Kevin Burke (rear left) pictured with his choices of Sheep Crossing Champion and Reserve Champion.
Champion of cattle crosses in Omagh was this Limousin heifer.
Keith Davison and Terry Mills of Millcottage Clydesdales with their award winning geldings. Also pictured is a representative of sponsor, Equestrian Farm Feeds, along with judge, John Drummond and steward, Gerry Broderick.