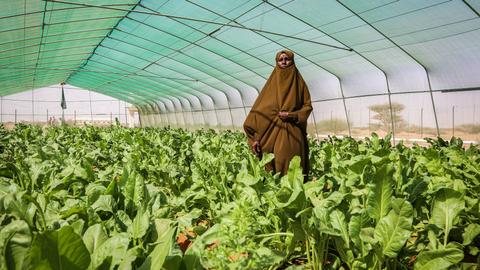 The introduction of greenhouse farming in Dharjaale, a drought-stricken village in eastern Somalia, has provided residents with an alternative source of income.

After losing three hundred goats and walking nearly 260 kilometers on foot, Zainab Mohamed, a pastoralist mother of five, left behind her livelihood and the habitat she grew up in after a severe drought hit Somalia in 2017.

Today, she owns a small farm built with transparent materials, known as greenhouse cultivation. Many of these farms are owned by pastoral families after losing their livestock to droughts.

Together with 25 families, Zainab formed the Dharjaale Farmers Association in the village of Dharjaale in eastern Somalia. Prior to this, families were pastoralists in the countryside where they roamed the bushes to herd cattle.

Zainab remembers leaving her home five years ago to save her family.

“It was a tough choice that I never wanted to make. My grandfather was born in these bushes and we raised animals as a source of pride and income. We sold their meat and milk in the local market Zainab said World TRT.

“But I saw my cattle die before me because there was no water or pasture to survive,” she continued.

In the state of Puntland, where Zainab lives, farming is not popular and most families are pastoralists who live in huts made of grass, sticks and clothes in the countryside. They herd goats, sheep and camels and migrate to the bushes in search of pasture and water for their animals.

But life in the countryside has become very difficult as they struggle with recurring droughts triggered by climate change. This year, the worst drought in 40 years is crippling the livelihoods of millions of people across the country.

According to the United Nations, around 7.7 million Somalis are in need of humanitarian assistance, while nearly one million people have been displaced due to the unfolding crisis last May.

Earlier this year, UK charity Save the Children said nearly 700,000 animals had died due to drought and the value of livestock had fallen dramatically, leaving millions without food.

“I can relate to the experiences of many of these families. I faced the same thing a few years ago, and I didn’t know what would happen to my family. Zainab said.

Agriculture as an alternative source of income

The majority of families in Dharjaale have been affected by recurrent droughts. Ahmed Ali, the mayor of Dharjaale village, says residents relied on pastoralism as their main source of income.

“When you talk to older people who lived in this area, they didn’t have a farming background. We all depended on cattle and kept thousands of them in the bushes around the village. But now you would hardly find family pastors,” the mayor said.

This meant that people were losing their livestock – their main source of income – and they knew of no other methods of generating income until the community partnered with a local aid organization, KAALO, which puts implementation of climate change adaptation programs in the region.

KAALO introduced the concept of greenhouse cultivation in Dharjaale – structures made of transparent materials that protect crops from weather and pests.

“Farming has helped me create an additional source of income. Now I can help my family go to the local market and buy basic groceries,” Zainab said.

“Farmers in the village can also sell their products in the local market which depended on markets in other towns, which are 400 kilometers from our village, to obtain products like tomatoes and peppers,” she added. .

With this new farming method, Zainab and her neighbors believe it will help them reduce the cost of living in their village.

“Families in Dharjaale reported better access to food following the implementation of greenhouse agriculture in the village, compared to families who did not create alternative sources of income during the harsh seasons,” said Muse Ahmed, Senior Climate Adaptation Project Manager for KAALO. World TRT.

“We have noted, despite consecutive failed rainy seasons, that families who have ventured into agriculture, which helps families create different sources of income, are more resilient than families who have adapted to pastoralism like sole source of income,” added Muse.

Fatima, a member of the farmers’ association, says the farmers have been able to sell their produce and have so far generated $3,000.

“That means each family was able to get about $107 from the farm. This amount is equivalent to selling two goats in the local market during a good rainy season,” Fatima said. World TRThighlighting how important it is for families who have lost their economic security due to droughts.

Somali authorities are also encouraging investments in climate change adaptation to alleviate the suffering of pastoralists.

While Somalia barely contributes to greenhouse gas emissions, it is severely affected by the effects of climate change.

In 2021, at the Glasgow Climate Change Conference (COP26), the Minister for Planning, International Cooperation and Economic Development of the Federal Government of Somalia, Gamal Mohamed Hassan, called on the international community to support countries like the Somalia who have struggled with the impact of climate change. .

“Somalia is one of the countries most vulnerable to the effects of climate change, and the climate crisis is one of the major factors impacting socio-economic stability and ultimately our national security. “Hassan said.

Over the past decade, annual global greenhouse gas emissions have reached their highest level in human history, according to the latest report from the Intergovernmental Panel on Climate Change ( IPCC) published in April.

“But unfortunately, despite the countries contributing the least to this problem, we are visibly paying the brunt of its effects…. [Somalis] pay for their lives and their livelihoods”

Hassan said during his speech at the COP26 summit. The IPCC report warned of catastrophic conditions if immediate and deep reductions in emissions across all sectors did not take place.

For Zainab and farmers in Dharjaale, the greenhouse initiatives are rekindling hope for a better future, as they hope for better weather conditions and a good harvest season.