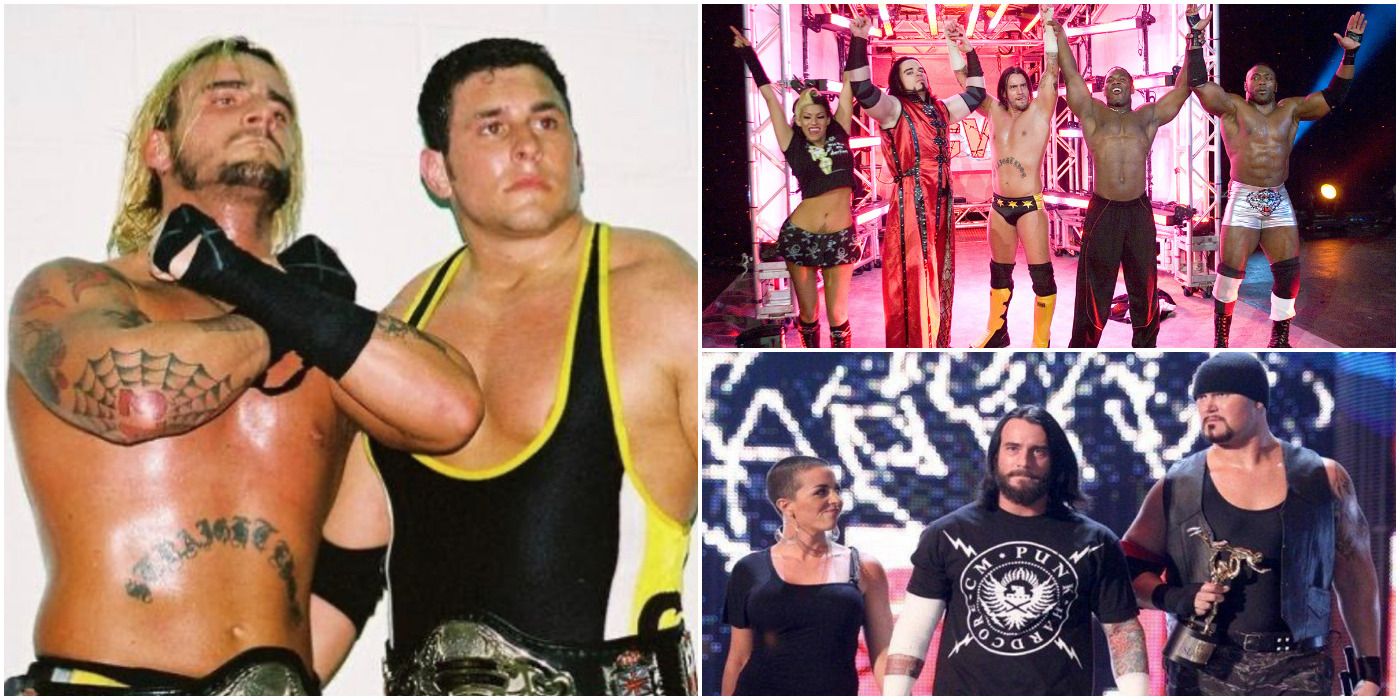 Every stable and tag team CM Punk has been a part of, ranked from worst to best

Returning to his wrestling days at IWA Mid-South, CM Punk has proven to be a standout performer in the sport, with success at Ring of Honor, WWE and now All Elite Wrestling. Although he was primarily a singles star, he also teamed up extensively with other wrestlers, both on tag teams and as part of stables or factions.

Before debuting in the revival of ECW, CM Punk first had a stint in WWE’s developmental territory, Ohio Valley Wrestling. While he managed to capture the developmental heavyweight title, he also had an extremely brief run as the OVW South Tag Team Champion alongside now-retired Seth Skyfire. After defeating former champions Shad Gaspard and The Neighborhoodie (aka JTG), Punk and Skyfire dropped the belts to Deuce and Domino just five days after winning them.

Speaking of the revival of ECW, one of the big early storylines involved young ECW heels like Elijah Burke and Kevin Thorn forming a faction called the New Breed to oppose veterans like Rob Van Dam and Tommy Dreamer. CM Punk would eventually join the New Breed, turning heel in the process. However, Punk seemed poised to be the best babyface in ECW, so it was quick to betray the New Breed and become a babyface again. Not only did the faction not really take off, but Punk’s involvement with the group was very short-lived.

CM Punk began wrestling for a backyard wrestling promotion called the Lunatic Wrestling Federation, which would later evolve into a more standard independent outfit. Teaming up with a wrestler named CM Venom as Chick Magnets led to a ring name that would define CM Punk, who never had another nickname during his wrestling career.

Although footage of the Chick Magnets is hard to come by, the team ranks higher than some of the groups above simply because of their historical significance.

Founded in 2003, Florida-based promotion Full Impact Pro has essentially operated as a sister promotion to Ring of Honor, and as a result has featured plenty of notable talent over the years. CM Punk played FIP from 2004 to 2005, and even formed a small faction. Claiming to be a leader around whom the outcasts of the world could rally, Punk had a group called the New Dawn, which included Samoa Joe in its ranks.

Before forming the New Day — not to be confused with the New Dawn — Kofi Kingston is no stranger to being randomly paired with other babyfaces like Evan Bourne and R-Truth. In 2008, he was randomly paired with CM Punk, and the two managed to defeat Cody Rhodes and Ted DiBiase Jr. for the World Tag Team Championship, starting a 47-day run as champions. Their run together, however, is rather forgettable, and the duo dropped the belts to The Miz and John Morrison on a home show in their first defense – two months after winning them.

A stable of mostly Illinois-based wrestlers – many of whom shared a trainer in Ace Steel – the Gold Bond Mafia included not only CM Punk and Colt Cabana, but also Chris Hero, future WWE authority figure Adam Pearce, and future Ring of Honor and Game Changer Wrestling commentator Dave Prazak. Mainly based in IWA Mid-South, the group has also appeared in other indies like CHIKARA. An impressive array of notable performers, the group’s name was a joke about how it felt to put Gold Bond powder on your genitals.

Following the disbandment of the Straight Edge Society (see below), CM Punk found himself taking over the leadership of another faction, The Nexus. With the ousting of Wade Barrett and the defection of many founding members, the New Nexus included Punk, David Otunga, Michael McGillicutty, Mason Ryan and future Bray Wyatt, Husky Harris.

The group arguably had a better t-shirt than the previous iteration of the Nexus, but the group failed to gain as much traction and quietly disappeared after Punk won the WWE Championship from John Cena in 2011. .

With few exceptions, it’s hard to go wrong with a faction led by Raven, one of the most charismatic and effective heels of the mid to late 1990s who never really became a big star in the main promotions. During his brief foray into Impact Wrestling (then known as TNA), Punk became a member of one such Raven faction, The Gathering, alongside Julio Dinero and Alexis Laree (aka Mickie James). Punk tagged with Julio Dinero, but never captured gold except for a month with the tag belts in the New Jersey-based NWA Cyberspace.

For WWE fans, the Straight Edge Society is the best CM Punk stable. While mostly in existence in 2010, SES viewed Punk as a messianic cult leader brainwashing people into following his upright lifestyle, and included Luke Gallows, Serena Deeb and Joey Mercury in its ranks. . For WWE fans, it was a new side to the previously babyfaced CM Punk, and featured memorable moments like head shaving initiations in the SES and an intense feud with Rey Mysterio.

Another Illinois-based faction of wrestlers, Ring of Honor’s Second City Saints, included CM Punk, Colt Cabana, their trainer Ace Steel, and Lucy Furr (aka Daffney) and Traci Brooks as valets. Although they didn’t appear as a stablemate too often during their ROH run, as a tag team, Punk and Cabana proved to be an effective and valued force during their team time, and managed to scoring two ROH Tag Team title runs, for a total of 100 days, not to mention some classic matches against teams like The Briscoe Brothers and The Prophecy.

Danny Djeljosevic is a writer based in San Diego, California. His last name is slightly easier to pronounce than it sounds.