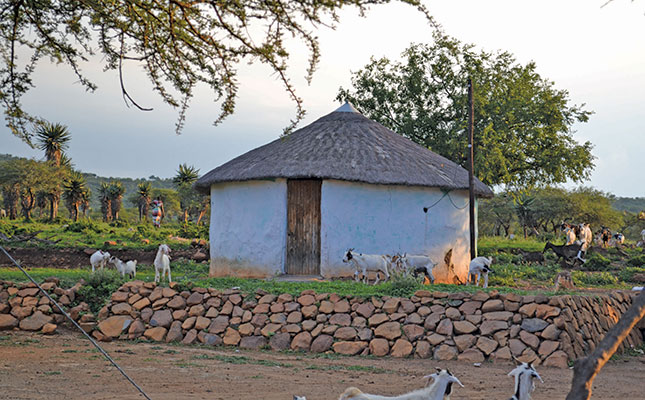 Since 1975, a rural development project in KwaZulu-Natal has been helping communal farmers improve their production of native goats. Today, these farmers are focusing on herd health and embracing technology to gain market access and build small businesses that support their industry.

In KwaZulu-Natal, a small free market revolution is underway, led by communal farmers in the local municipality of Msinga. And while the scale of operations of communal and commercial farmers may differ, they have two things in common: the inescapable reality that cash is king, and the fact that the health of their animals is vital.

This quickly became evident during Farmer’s Weekly’s recent visit to Msinga goat herders. For the past 47 years, the Mdukatshani Rural Development Project (MRDP), a non-governmental organization, has helped these farmers and others improve their lives, livelihoods and productivity by using locally available resources to ensure long-term durability.

“We are involved in 150 communities from Weenen to Jozini,” explains Rauri Alcock, project manager.

Alcock has been involved in land reform since the 1980s and believes the fundamental way it has been handled is wrong.

“The reality is we don’t have five million farms,” says Alcock. “We live in a post-land reform world and have to ask ourselves: what now? We have educated young people and land available, but our extension services are non-existent.

The Value of Native Goats
Alcock thinks this is where raising native goats can play a key role. In fact, he cares so much about it and has done so much research on the subject that he wrote the master plan for the goat sector which was included in the master plan for agriculture and agro-industry.

“We have a million children who come out of school every year and they struggle to find work.

“Goats could be a viable solution [to the job shortage problem] because about 70% of all black people own goats,” he says, adding that 80% of all goats in South Africa belong to this group of people.

For South African goat farming to make sense, it needs to be commercialized, he stresses. Herd health also needs to be improved, and that’s what he and his team are currently doing by focusing on communal dip tanks and feeding the kids for the first two weeks of life. This, he says, “helps them grow faster.”

Alcock adds that the long distances goats typically travel for food and water, along with high tick loads and feeding problems, are the main reasons for the high mortality rates among kids during their three first months.

Alcock’s strategy of focusing on lamb feeding and dipping is already paying off. Previously, local farmers lost seven out of 10 children, whereas today they only lose one or two.

“It has enabled our communal farmers to become serious business players,” says Alcock. One of the producers in the community, Mhambiseni Mncube, was already a farmer before joining the MRDP program, but he did not have the vision for his farm that he has today.

“Previously, we used a combination of car oil and Jeyes Fluid to eradicate ticks,” he explains, adding that this concoction stains the skins of animals. “Buyers don’t want discolored animals.”

In addition to helping farmers improve their herds through communal dip tanks, the MRDP has taught them that children need specialized feeds at certain times.

However, according to Alcock, to really get the most out of communal goat farming, it is imperative to achieve critical mass. “That’s why we would like our program to expand to other provinces. But it is crucial for our [communal] farmers to be close to each other, otherwise the system might not work.

Traditional ceremonies
The value of native goats lies in their use for ancestral ceremonies, says Alcock.
“Our farmers cannot meet the demand. In Durban district alone, about 2,000 goats are slaughtered every week.

Interestingly, the market doesn’t necessarily want bigger goats, but it does want them as white as possible.

“The whole animal is eaten after being slaughtered. So a smaller animal is better, because nothing gets lost,” he explains.

Whiter animals are preferred, as they are considered more valuable in a slaughter ceremony.

Live animals are worth much more in South Africa than in neighboring countries.
“A live goat will sell for R600 in Mozambique and R1,400 locally,” observes Alcock.

Plunge
Every Tuesday or second Tuesday, depending on the time of year, all the communal farmers in Msinga bring their sheep and goats to the local district soaking tank.

From 5 am, the animals find themselves grouped together, waiting to be soaked. Each herd is guarded by women and young children, while the men gather around the pelvis, where the most muscle is used.

The somewhat laid-back atmosphere quickly turns to business, as an MRDP field worker arrives with the soaking tub. Each herd is then moved into the kraal, the animals are gently guided into the dive and their heads pushed underwater to ensure full cover.

After being dipped, the dripping animals stand in a pressure passage, where they are counted and notes are taken before the animals are released. After that, the next herd enters the dip kraal.

According to Alcock, the arrangement at the MRDP is that a farmer should only increase the number of animals that can enter the pressure passage. In this way, the size of the herds remains manageable.

“When a herd gets too big, you start having pest and disease problems,” he explains, adding that a herd of 50 to 100 animals seems to be the ideal size for the region.

This highlights another concern of breeders: to identify a sick animal as soon as possible.

“Often family members who are knowledgeable [about such things] are men. But they often work away from the farm. Usually young children in grades 4-6 spend the most time with the herds. So we are now teaching elementary school children to identify the disease [in the animals]says Alcock.

Another herd owner, Mvezelwa Mchunu, says it helped him immensely that the NGO was able to provide herders with training in animal health.

“We are now able to use drugs such as antibiotics, which we also know can only be used for a short time,” he notes.

Ideal location
Alcock says the district has always been a popular destination for ranchers because of its sweetveld. Farmers there once employed sharecroppers, which meant that people worked on the farms in exchange for the right to live there.

However, improper agricultural practices have led to severe soil erosion. In fact, Weenen, part of Msinga district, was once known as the most eroded part of South Africa, says Alcock.

“Politicians used to joke that they had to divert planes around Weenen due to air pockets caused by erosion.”

After the apartheid government expropriated the land in the late 1940s, extensive soil and wetland reclamation measures were implemented.

Today, erosion is no longer the problem it once was, but that problem has been replaced by the encroachment of the bush, which has created the perfect foraging opportunity for the native goats.

Building the Goat Economy
Alcock admits that the majority of young people in the area have no interest in becoming goat herders. This is why the MRDP is actively helping local people to start small businesses that will support the goat industry.

“We started training some of the youngsters in basic veterinary skills, like deworming animals,” he says. They also help them set up businesses where farmers can buy feed for their animals in times of scarcity or when they need specialized feed.

Another problem communal farmers face is market access. “We helped create small speculative enterprises to connect farmers to their markets,” says Alcock. These are managed through WhatsApp groups, where speculators can request a certain number of goats, or a farmer can advertise the number of animals he has available for sale.

“All of these businesses have helped farmers reduce the mortality rate of their goats and improve their cash flow,” says Alcock.

Mchunu can attest to this: “Before, I could only sell [my goats] when someone contacted me directly. I had to wait to sell animals, but now I can sell them when I need them.

MaMchunu Yengwa, a community member, explains that the main reason she became a farmer was to earn an income. “Whenever I need money, I can phone a buyer or [MRDP], which is my link to the market. While her family has always raised goats, they now have a way to connect with buyers.

Without government or outside support, the project has helped farmers grow their businesses to such an extent that it is possible for a subsistence farmer to earn R150,000 a year, most of which is profit, according to Alcock.

The MRDP has also helped goat farmers expand the reach of their products. Mchunu says that in the past they only used goat skins for seating. “We were taught to value hides, and today we know how to use them to make belts and beshus [traditional ‘aprons’ worn by Zulu men].”

Production Barriers
Communal farmers in Msinga argue that access to water and food remains the biggest challenge for producers in Africa. According to them, there were once protected camps on the government land they farm today, and back then the herds had more protection and could be rotated between camps.

Today, animals graze where they want, so the vegetation does not have time to rest and recover.

Mchunu adds that the lack of water in the Msinga region is a major concern. “We don’t have any dams, and it’s even difficult to get drinking water for the community. How to justify giving water intended for human consumption to animals?