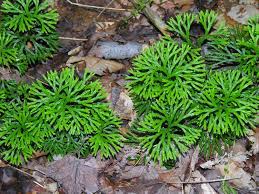 If you’ve ever hiked or just walked in the woods, I guarantee you’ve seen this interesting group of undergrowth plants. Clubmoss is an ally of ferns which includes horsetails, spike mosses and quillworts. They are classified as allies of ferns due to the combination of a spore-producing phase and a sexual phase. There are about 1,200 species in the world. Inside the factory classroom, the clubmoss is called Lycopodium who interacts with Lyco– Wolf; podium– foot. Common names include ground pine, running pine, and even wolf-claw club moss.

As one might guess, the name comes from its appearance. These little guys are evergreen perennials with lots of little leaves. These neat ancient plants are vascular plants, meaning they have specialized tissues to perform photosynthesis and absorb water. The plants are connected by horizontal stems that run shallow under the ground. Or in my observation, just below a thick cover of leaves not quite below ground. If you see several side by side, it is most likely a single plant. This form of plant growth is called the rhizomatic root system.

They have an interesting life stage and spore release strategy that few people see outside of a class of plant ecology. During the developmental stages of reproduction and leading up to spore release, they develop a symbiotic relationship with fungi. Mushrooms provide essential nutrients for the reproductive phase in exchange for carbohydrates.

This sexual stage can remain dormant for 7 years and take up to 15 years to reach sexual maturity. Some species of clubmoss reproduce asexually through underground stems or a “runner” where groups of stem cells break off and form new plants.

Lycophytes (clubmosses) are thought to have evolved 410 million years ago, making them one of the first groups of vascular plants to use water and food separately using special tissues called xylem and phloem . Both xylem and phloem are features found in many plants today, especially trees. The xylem is the plant structure that conducts water and nutrients upwards from the roots. Conversely, the phloem leads products downward from the leaves.

Club moss as well as large ferns inhabited the swamps of the Carboniferous period of geologic history. Clubmosses were tree-like and reached heights of 100 to 135 feet. The plants of that time dominated the earth. The deposition and decay of these plants during the Carboniferous Period shaped the coal and petroleum basins of the world.

Human use of clubmoss was extensive, for medical and decorative purposes and even for pyrotechnics. Native Americans used its spores and leaves for tea to treat alignments such as urinary tract infections, headaches, and induction of labor. Some cultures used the spores as an aphrodisiac (*Whistles*). The spores are hydrophobic, meaning they repel water, which is why they were used as a powder for sores and rashes on babies in the 1800s and 1900s. Its hydrophobic properties were also used to coat the pills to prevent them from sticking. Its high oil content made it useful in ceremonies by Native Americans and in stage production and fireworks. Additionally, clubmoss was used for Christmas decoration and is now discouraged due to its long but fascinating life cycle.

A native of Ticonderoga, Ken Johnston graduated from SUNY Brockport in 2015 with a combined degree in terrestrial and aquatic ecology with minors in business administration and chemistry. He has researched Great Lakes wetlands, Finger Lake agricultural stream health, and harmful algal blooms and is working on a Masters in Biology. After graduating, he worked for the Darrin Fresh Water Institute on the environmental monitoring program called The Jefferson Project. For the past two years he has worked as a licensed NYS Wilderness guide and boat captain on Lake George. Ken grew up loving the outdoors and can be found on the trails with his dog, Laikly.

View all posts by →