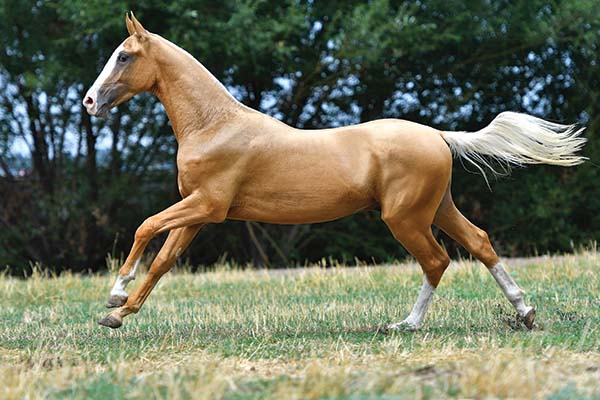 Imagine a horse that can live on little forage in a dune-swept desert where cobras hide in the brush and water is scarce. This horse can also carry a rider for hours through this terrain, fight in fierce battles and provide companionship.

Such a horse once existed in the Karakum Desert of present-day Turkmenistan. Known as the Turkoman, this horse in its ancient form is now extinct. But thanks to great fortune and the devotion of the Turkmen people, the descendants of the Turkmen still survive in a race called Akhal-Teke.

The Fascinating History of Akhal-Teke

The ancestors of the Akhal-Teke were treasured in antiquity and used as war horses throughout Eurasia. Scythian warriors in Central Asia rode Turkmen horses hundreds of years before the birth of Christ.

Later, the ancient Greeks appreciated the Turkoman. In fact, some historians believe that Alexander the Great’s famous horse, Bucephalus, carried the blood of this exotic breed.

In the 13th century, the Mongol invasions divided the Turkmens into small clans and pushed them into the desert, north to the plains of Kazakhstan and east to the shores of the Caspian Sea. Together with a group of Turkmen, some Turkmen horses became isolated in southern Turkmenistan, far from trade routes.

The Akhal, a remote oasis surrounded by the Karakum Desert and the towering Kopet Dag Mountains, located between Turkmenistan and Iran, became home to the Teke tribe. Here, members of the Teke tribe developed the Akhal-Teke, a breed of ancient lineage and high purity derived from the Turkmen horse.

In the centuries that followed, the Akhal-Teke breed remained virtually unchanged as it made its way through Central Asia and Russia. The Teke’s nomadic lifestyle required a horse that could travel long distances at a rapid pace.

In the 19th century, these horses were incorporated into the Russian Empire, and the Akhal-Teke became prized for its beauty and athletic ability.

In 1935, a group of Turkmens organized to create a long-distance trek that would bring more attention to the Akhal-Teke race. Ridden on Akhal-Teke stallions, the group traveled more than 2,500 miles – from the capital of Turkmenistan (Ashgabat) to Moscow – in 84 days. The desert segment of the ride was 225 miles long, and the horses completed it in three days with very little water.

In 1941, the first Akhal-Teke herd book was published by the Russian Institute of Horse Breeding. The breed was adopted in Russia and at the end of World War II Soviet General Zhukov rode an Akhal-Teke stallion named Arab in the 1945 Moscow Victory Parade.

It wasn’t until the 1960s that the Akhal-Teke came to the attention of the rest of the world. In 1960, a black Akhal-Teke stallion named Absent – a son of Arab – won an Olympic gold medal in dressage for the Soviet Union. With his rider Sergei Filatov, Absent won medals at two other Olympic Games.

Akhal-Teke in the United States

The exotic Akhal-Teke didn’t find its way to the United States until 1979, when Phil and Margot Case of Shenendoah Farm in Virginia imported an Akhal-Teke stallion and mare they had purchased during an auction in Moscow.

The Cases used the pair to start their American breeding program and also started the Akhal-Teke Association of America. The purpose of the association was to establish, maintain and operate a non-profit organization composed of owners, breeders and friends of the Akhal-Teke. Its goal was to preserve and promote the breed in North America.
These many years later, the Akhal-Teke Association of America estimates that over 300 living Akhal-Tekes are currently registered in the United States. The most popular use of these horses in North America is for endurance.

Indeed, the Akhal-Tekes make a name for themselves in endurance and limited distance racing around the world. They also compete in eventing, show jumping, dressage, western, trail and polo events.

Akhal-Tekes have a unique metallic sheen to their coat, a result of the breed’s hair structure, which bends light as it hits the horse’s coat, giving it a golden hue.
The amazing history and exotic beauty of this breed is worth exploring. Through the efforts of the Akhal-Teke Association of America, the breed will continue to capture the attention of horse enthusiasts across North America.