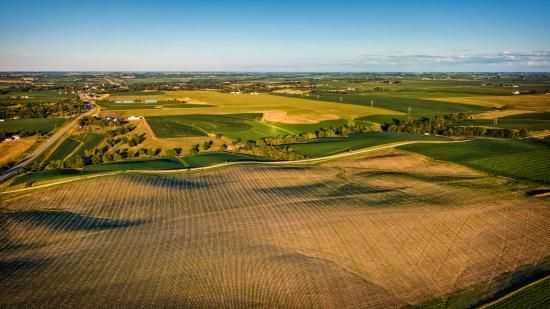 Driving on rural Illinois roads reveals mile after mile of corn, soybeans and wheat. Recently I traveled to California and was driving a long freeway in the central part of that state. It was similar to the freeways in my home state of Illinois, flat with small towns scattered along the way. However, the only crops I saw were irrigated almonds, grapes, and oranges. Around the fields, nothing without irrigation was green, not even the weeds.

It got me thinking about perspective: we often don’t know much about the overall agricultural landscape in distant states. The range and variation in income and farm size is wide, as evidenced by comparisons of farm income, farm size and crop production in different states based on USDA data for 2019.

California generated $ 10.9 billion in net farm income from just 69,000 farms. Obviously, these are large and profitable farms, because the average net income per farm was around $ 158,000. At the other end of the net income spectrum is Alaska, where farms collectively suffered a loss of $ 5.5 million, or about $ 5,200 loss per farm. No other state posted a cumulative net farm loss for 2019. Surprisingly, the largest state (Alaska) has even fewer farms than the smallest state (Rhode Island): 1,050 to 1,100.

Nebraska with $ 4.1 billion, Iowa with $ 3.2 billion and Washington with about $ 3 billion round out the top five in net farm income by state. The last one surprised me. Washington growers grow nearly $ 2 billion worth of apples, and those apples are profitable, as Washington is only 12th in total farm cash receipts, but fifth in net farm income. Washington farmers also raise cattle and produce a lot of dairy products and potatoes.

Where are the farms?


Another surprise for me was the upper states in number of farms. After Texas, Missouri had the second highest number of farms at 95,200. Divide the $ 2.3 billion in net farm income by that number, and it’s only $ 24,200 per farm. The third was Iowa, as you might expect, with 85,300 farms. Number four and five were Ohio with 77,800 farms and Oklahoma with 77,300. I was surprised that Nebraska, with the third highest net farm income, has only 45,700 farms, which is the 18th in number of farms. The state has a large farm size averaging 983 acres.

The number of acres of farmland per state was also intriguing. Texas dominates all other states in acres, more than twice as many as second-place Montana, with 58 million acres of farmland. As expected, Montana’s primary crop is cattle ($ 1.35 billion in cash receipts), but the combined income from wheat and hay exceeds the income from livestock. Kansas is third with 45.7 million acres of farmland. Cattle lead cash receipts ($ 8.4 billion), but Kansas farmers also grow a lot of corn, soybeans, wheat, and sorghum, worth a total of nearly $ 6 billion. Nebraska with 44.9 million acres and South Dakota with 43.2 million acres round out the top five farm and ranch acres. South Dakota has a very balanced crop production between animals and grains at about $ 3.5 billion in cattle and hogs and about $ 3.8 billion in corn and soybeans combined.

The three smallest states in acre are New Hampshire with 430,000 acres, Connecticut with 380,000 acres, and Rhode Island with only 60,000 acres. Some individual Heartland farms are larger than all of the agricultural acres in the state of Rhode Island. In fact, Bill Gates owns six farmland worth Rhode Islands.

Ranking states by gross farm cash receipts reveals California with nearly $ 50 billion, followed by Iowa, Nebraska, Texas and Minnesota. (See graph above.) Based on gross receipts, dairy is the biggest crop for California. Corn is the primary crop in Iowa and Minnesota, and cattle make up the bulk of Nebraska and Texas’ cash receipts. Most crops from major producing states are the usual suspects. However, Texas also produces over $ 2 billion a year in cotton and over $ 2 billion in broilers (chickens).

Perspective of farm size and type

Another interesting statistic is that net farm income as a percentage of gross receipts is generally higher in the 10 states with the lowest agricultural production. Apparently, in Massachusetts, Connecticut, and New Hampshire, margins are higher on crops such as flowers, vegetables, cranberries, melons, and turkeys – over 40% of net income on average. When you grow 70 acres in total, you need efficient crops.

As I traveled across the country, I noticed a big difference in what is considered a “big” or a “small” farm. In Kanawha County, West Virginia, where I was born, you are lucky enough to find 5 acres of flat land. Twenty acres would be considered a huge field. However, in Illinois, 20 acres is barely enough to entice a grain farmer to lease it. A quarter section (160 acres) is considered a decent-sized field in southern Illinois, but in eastern Colorado an un-irrigated quarter-section is considered a pip-squeak, which is barely worth worth touching. On the other hand, the grain farmers I know in Illinois can’t imagine running a 70,000 acre cattle ranch in Colorado or growing 10,000 acres of wheat themselves. It’s all about point of view. The average farm size in China is only an acre or two, and they make a living from it.