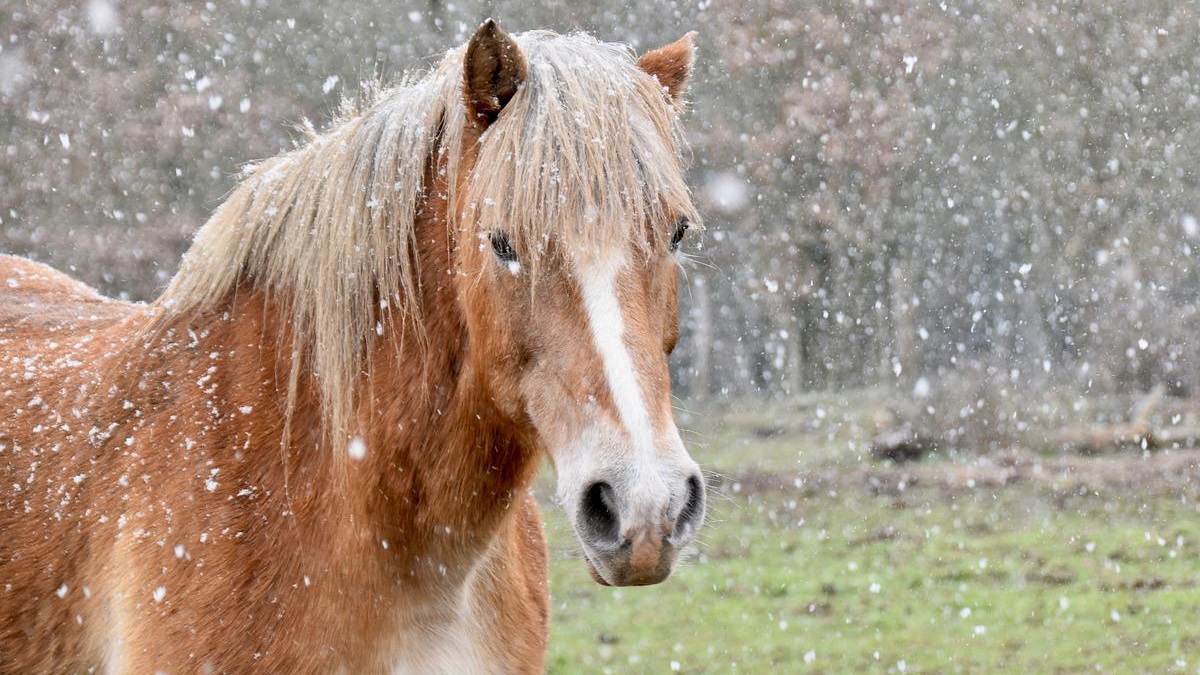 Our readers support us. This article may contain affiliate links. We earn on qualifying purchases. Learn more

Canada is a vast country, home to bustling cities, fierce wildlife and beautiful and formidable landscapes. The Great White North is also home to some amazing horse breeds.

Horses have a long history in Canada and these breeds have played an important role in the development of the country.

Although most of these breeds are considered rare, there are dedicated owners and breeders working to preserve these wonderful horses.

Here are the seven breeds of Canadian horses:

The Newfoundland pony was developed in the Canadian provinces of Newfoundland and Labrador over the centuries. These sturdy, muscular ponies have adapted to the harsh climates of the North Atlantic islands.

The Newfoundland breed is descended from British, Scottish and Irish pony breeds imported by settlers. These breeds include Dartmoor, Exmoor, Connemara, Highland and Galloway ponies.

Isolated from the rest of the world, these breeds interbred for hundreds of years, creating the Newfoundland pony.

Newfoundland ponies stand between 11 and 14.2 hands tall and weigh between 500 and 800 pounds. They have a muscular build, a small head, a structure that ranges from fine-boned types to larger stocky types, and a thick mane and tail. Newfoundland ponies are usually bay, black, brown, chestnut, brown, gray, roan or white.

Newfoundland ponies roamed freely around Newfoundland and were used to plow gardens, haul fishing nets, and haul kelp and timber. Their numbers once numbered in the thousands until anti-stray animal regulations and the slaughter of ponies for meat drastically reduced their numbers.

Today, the Newfoundland Pony Society is working to preserve this historic breed and they have become trusted choices for riding and driving ponies.

As the official animal of Canada, the Canadian horse is of great importance to the country. Nicknamed the “little iron horse”, the breed is renowned for excelling in any task given to it.

The Canadian horse dates back to French horses brought to Quebec from the ships of King Louis XIV between 1665 and 1670.

Although the exact origins of all the horses are unclear, they likely included Bretons, Normans, Arabs, Andalusians and Barbs. Horses were leased to farmers or country gentlemen for money or in exchange for a foal, remaining the property of the king for three years.

The breed continued to grow and became popular across Canada and the northern United States. The Canadian horse has played an influential role in American breeds including the Morgan, American Saddlebred and Standardbred.

Many Canadian horses were imported to America for use in the Civil War, resulting in a sharp decline in numbers.

During their heyday, Canadian horses were categorized into three types: the Canadian Heavy Draft or St. Lawrence, the Frencher, and the Canadian Pacer. However, these categories no longer exist as their remaining stock has been reincorporated into the breed.

Today, Canadian horses are popular for riding and driving, excelling in many disciplines.

Canadian Warmbloods excel in dressage, eventing and show jumping. They are suitable for riders of all levels, from beginners to Olympic level. These athletic horses are known for their good temperaments and willingness to please.

Canadian Warmbloods are typically between 15 and 17 hands tall and weigh between 1,000 and 1,300 pounds. They have medium builds with athletic bodies with good musculature, the register accepting different types.

Canadian Warmbloods come in a variety of colors, including bay, chestnut, and gray.

The Sable Island Horse is a small wild breed of horse found on Sable Island off Nova Scotia. Wild and free, they are federally protected and the herd lives unmanaged.

Although legends say the horses swam to the island after a shipwreck, there is no historical evidence to support this theory. Instead, horses were intentionally brought into the 18th century. The first registered horses were brought in by a Boston pastor, Reverend Andrew Le Mercier.

The horses of Sable Island are thought to be descended primarily from horses captured by the British during the expulsion of the Acadians. Acadian horses included Breton, Andalusian, and Norman breeds, later crossed with New England horses.

During the 19th century, other breeding stock, including Thoroughbreds, Morgans and Clydesdale bloods, were sent to the island to improve the breeding stock.

During the 19th and 20th centuries, horses from Sable Island were regularly rounded up and transported to the mainland. On the mainland, they were often sold for slaughter. However, in 1960 the Canadian government protected the horses in their wild state.

Sable Island horses are between 13 and 14 hands tall and weigh between 700 and 900 pounds. They have stocky, short builds with arched necks and shaggy coats, available in a variety of colors. Although they are often pony-sized, they have a horse phenotype with horse ancestry.

The Lac La Croix Indian pony, also known as the Ojibwa, is a breed of semi-wild horse developed by the Lac La Croix First Nation. This special breed has a long-standing spiritual relationship with the Indigenous peoples of Canada.

The history of the Lac La Croix Indian pony and the Lac La Croix people goes back hundreds of years. In fact, some believe the breed dates back to before Europeans brought horses to America.

The Ojibwa people used them to haul wood and pull blocks of ice. Then in spring and summer, the ponies had time to roam freely.

While they were once plentiful, in 1977 there were only four mares left. In order to save the breed, Spanish Mustangs were introduced into the lines. Although still rare, they are used in therapeutic programs and to promote indigenous heritage.

The Lac La Croix Indian pony stands between 12 and 14.2 hands and weighs around 700 to 900 pounds. They have a strong and sturdy construction with durable feet and legs and excellent endurance.

Hailing from the provinces of Saskatchewan and Manitoba, the Canadian Hardy Pony is a relatively new breed. The breed was first developed by Dr. Peter Neufeld of Manitoba, Canada with the founding of the Canadian Rustic Pony Association in 1989.

The Canadian rustic pony was created by breeding Arabians, Welsh ponies and Heck horses. Heck horses, which resemble the now extinct Tarpan, were selected from Zoo Atlanta for breeding. Although relatively rare, they are great family horses, excelling in both riding and driving.

Canadian hardy ponies are between 12.2 and 13.2 hands tall and weigh around 700 to 800 pounds. They have a slightly domed facial profile, a thick but arched neck, and a sturdy body. Canadian hardy ponies can be gray, buckskin, brown, or bay, featuring primitive markings and a partially raised mane.

Another register of warm blood, the Canadian sport horse is an evolving breed. The goal is to produce a horse capable of competing successfully in the disciplines of dressage, hunter, eventing and show jumping.

Originally the Canadian Hunter and Light Horse Improvement Society, it became the Canadian Sport Horse Association (CSHA) in the mid-1980s. It is the oldest registry of native sport horse breeds in Canada. Additionally, the CSHA is the first open herdbook in North America to include European warmbloods in its pedigrees.

Canadian sport horses got their start with farm mares, usually of mixed breed, crossed with thoroughbreds. With the increase of European warmbloods in Canada during the 1900s, the SCVS saw an opportunity to improve the quality of performance horses.

Why Netflix Deposits Its Money In Black Banks